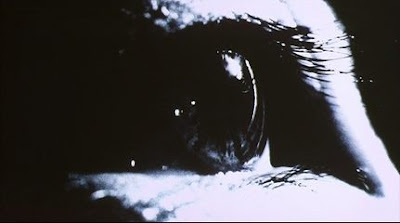 Unbeknownst to most casual film-goers, not all Japanese horror movies revolve around angsty, hirsute dead girls. Toshiharu Ikeda's 1988 shocker Evil Dead Trap (Shiryo No Wana) is a blatant homage/rip-off of various horror styles that ends up being an enjoyably creepy and gory little flick in it's own right. That said, it never really rises above it's simple ambitions to ape the works of other (better) directors, but it doesn't really matter - it is what it is: a grimy, nasty, violent giallo. At least it wants to be a giallo, but it also wants to be other things, and thus ends up as a confusing mixture of sub-genres. The first two-thirds of the film are a pretty successful mixture of Argento-style giallo and Fulci-esque gore (going as far as to include a voyeuristic close-up of a blade, messily piercing an eyeball). Then in the final act, it suddenly careens right off course and turns into bizarre Cronenbergian body horror. Evil Dead Trap is atmospheric, bloody, sleazy fun, but makes little sense.

The cheap sounding synth score by Tomohiko Kira is, predictably, a total rip-off of Goblin and Fabio Frizzi. At times cringe-inducingly saccharine and almost unlistenably bad, it does manage in it's best moments to successfully invoke the feel of the Italians that it's imitating (especially in context, while watching the film). As far as I know, this is an unofficial OST, and has never been made commercially available (none of the tracks are titled). My thanks to the original uploader for making this rare horror score available. Hit the link below.