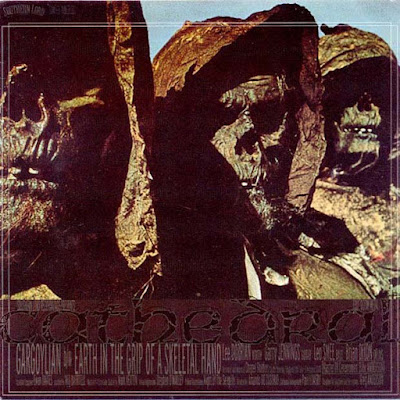 Cathedral are in Australia later this month to play their last two headlining shows ever. They're also making a number of festival appearances at a big, touring rock fest, with a lineup so cringe-inducingly bad that I'd rather do this to my ears than subject myself to a minute of it. 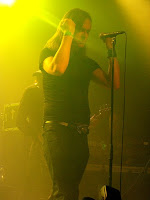 I'm not too crazy about Cathedral's recent output, but their earlier stuff is epic doom incarnate, and in my opinion some of the best the genre as a whole has ever produced, right up there with doom gods Pagan Altar, Saint Vitus, Corrupted, Electric Wizard etc. I don't know how much of their classic material Cathedral are including in their recent sets, but I'm hoping for a track or two off of Forest Of Equilibrium.
The blood sacrifice I'm offering you today is their long out of print and very rare Gargoylian 7". It's the obvious choice for the EYE, given its Blind Dead cover art, and b-side track that is pure, raging, early UK d-beat (completely out of character for the band, but not too surprising considering singer Lee Dorrian's earlier stint with Napalm Death).
Details for Cathedral's Sydney show HERE. Have a listen to the 7'' HERE.
Posted by Aylmer at 15:28 7 comments: 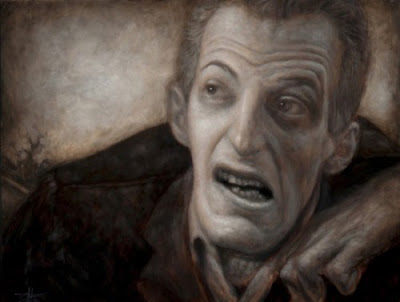 artwork: Chet Zar
Bill Hinzman, famous for his portrayal of the "cemetery zombie" in Romero's Night Of The Living Dead, has died. Some may consider him to be a minor player amongst the pantheon of modern horror cinema, but I think his contribution was a vital one, and certainly worthy of memory.

He was after all the original "modern" zombie. The ancestral progenitor to an endless horde of the walking dead that has been infesting our screens for the 44 years since he lurched out of that first cemetery.

In fact, the legacy of NOTLD is virtually immeasurable. Not only is it the forerunner of the modern living dead film, but many consider it to be the precursor to modern horror cinema in general. It heralded in an era of horror that would be more visceral, allegorical and thoughtful than anything that had proceeded it.

Viewed in that light, Hinzman's contribution to horror as the inaugural monster of the new era is a profound one indeed.

Bill also had minor parts in Romero's next three films - There's Always Vanilla, Season Of The Witch and The Crazies, on which he also served as D.O.P.