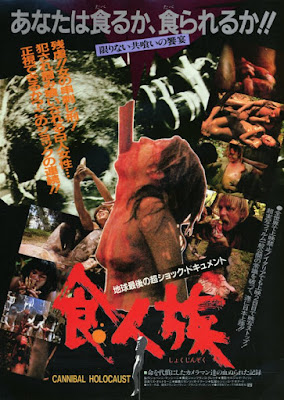 It's Xmas, so let's take a moment to reflect inwardly and... nah, fuck that, let's talk about Cannibal Holocaust and House On The Edge Of The Park instead.

300-issue-old Fangoria just reported that Ruggero Deodato wants to cast David Hess in Cannibal Holocaust II. Earlier this year I heard that the project had fallen apart (see poster at right) - but assuming that Fango's sources are correct, Holocausto Canibal II would reunite the notorious duo for the first time since the excellent House On The Edge Of The Park and the execrable Body Count.

A comment on the Fango article also mentions some discussion of Federico "Shadow" Zampaglione coming aboard to serve as assistant director on the film. To really fill me with holiday cheer however, I'd like to see Deodato send everyone's favourite whipping boy Giovanni Lombardo Radice into the green inferno. But given Radice's very public regrets about Lenzi's Cannibal Ferox, that ain't gonna happen!

If all goes to plan, Deodato and Hess might be sweating it out on location in the Philippines at some point in the first half of 2011. 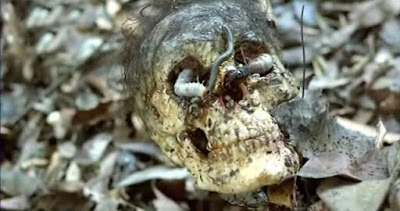 At the supermarket yesterday, the bearded fellow with furrowed brow at the checkout next to mine turned out to be none other than Elrond Half-Elven - son of Eärendil & Elwing and Lord of Rivendell. At over 6,000 years old, the one-time herald of Gil-galad is a legendary veteran of the War of the Ring, having done battle with the foul hordes of Morgoth's Servant at both the Fall of Eregion and the Siege of Barad-dûr. At Barad-dûr he fought bravely beside Elendil and Gil-galad, even as both were felled by the Dark Lord's hand. I assume he was at Woolworths to stock up on lembas, miruvor and maybe a case of Ent-draught.

I politely asked him if he'd be returning to Middle-Earth for The Hobbit. With a twinkle in his eye, he smiled and said yes...
Posted by Aylmer at 17:39 4 comments:

Email ThisBlogThis!Share to TwitterShare to FacebookShare to Pinterest
Labels: Hugo Weaving, Peter Jackson, The Hobbit, The Lord Of The Rings 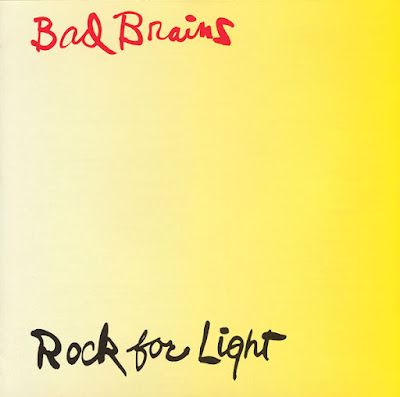 In 1983 Rock For Light was among the first 20 or so punk records that I ever bought or heard. I could go on about how it challenged my understanding of what the philosophy and culture of hardcore could be about (not that I thought about it in those terms at 14 years old), but the more important point is the music itself. The inclusion of religion may have confused and annoyed me, but it paled into insignificance before the devastating ferocity of the Brains' sonic attack. The previous year I'd been completely floored by the blinding intensity of This Is Boston, Not L.A. and Hüsker Dü's Land Speed Record, but neither of those LPs had the sheer hair-raising emotional power of Rock For Light. It was mind blowing.

I saw them at the Marquee in London six years later, just before they split for the first time. I remember being surprised at how laid back the band looked while shredding so hard - all except H.R. that is. He didn't move around the stage much, but he exuded the white-hot, unfaltering commitment of a man completely possessed. A wide-eyed madman on a mission, his presence filled the room in a way that I've seldom experienced since. As they tore through their set and H.R. threw his large frame through a couple of his signature back flips, I barely averted my eyes... even when the pinned and drunken crusty behind me pissed all over my leg.

As always seems to be the case, such ardent zealotry comes at the expense of a sense of humour, open mindedness and, perhaps, sanity. H.R. didn't like the Big Boys... and he doesn't like movies either:

Or it just may seem
Lost the real scope of life.
The hope of life,
To cope with life,
And found it on the screen.

And how many times have we heard that line do you think
I'm blind to trade my mind for what you call fine.
Never in my time I'm not in your movie.

Hey, what can it be on the big white screen
Hey how can you see you're living in 3D.

A child is influenced by the make believe
To take advantage of this truth is cold hearted sin.
So I say to youth right now.
Don't sway to the unjust,
No matter what they say,
Never give in.

Or should that be "never have fun". Anyway, I'm a strong believer in separating the artist from his art - what they do at home is their business, not mine. An eccentric and abrasive personality seems to be a byproduct of genius.

This is for anyone who's only heard the poorly remixed and rearranged Caroline Records CD. This is the original 1983 PVC mix and song order, and remains the only way to listen to this album. Fuck revisionist reissues! It's a pretty big file in FLAC, so you'll have to delete some of that trendy new shit to make room for it... 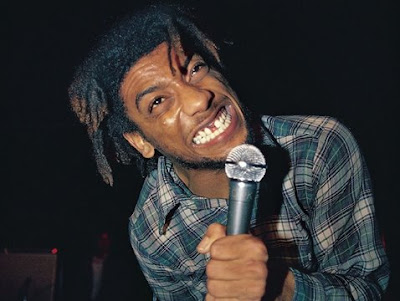