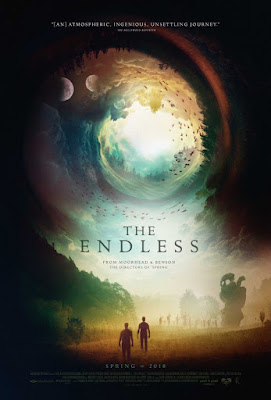 This week saw the reveal of this fittingly beautiful and trippy poster for THE ENDLESS, Aaron Moorhead and Justin Benson's impressive followup to their cult hits RESOLUTION and SPRING. All three films (which can loosely be referred to as the Shitty Carl trilogy) are essential viewing for fans of Lovecraft, the arcane and the eldritch. THE ENDLESS will hopefully hit local cinemas later this year.

Feel free to help yourself to my slightly unhinged reviews for SPRING and THE ENDLESS. But, you know, do what thou wilt. 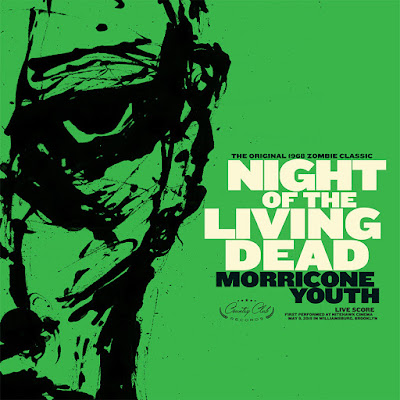 Last night I pushed through a haze of post-work fatigue to attend a screening of Romero's NOTLD (first time on the big screen for me!), with live accompaniment by New York's Morricone Youth. The band are here in Sydney to perform their re-score of the Pittsburgh lensed zombie classic, as well as Miller's MAD MAX. Having done zero research on the band beforehand, I went into the screening unsure of what to expect. Rock? Synth? Chamber orchestra? Taking my seat, third row from front, it became immediately obvious from the setup (bass, guitar, drums, two keyboard/synth rigs, vocals) that my secret hopes were to be rewarded: I was in for some proggy goodness, ala Goblin.

Morricone Youth delivered on that promise in spades, at points almost outplaying the Italian masters at their own game. What they've essentially done here is to give NIGHT a sister score to Goblin's iconic cues for DAWN OF THE DEAD. Mounting waves of pounding rock, throbbing synth and spooky glockenspiel, elevated to euphoric levels by some fantastic, operatic vocals (performed by a woman who I can't find a mention of anywhere, what gives?). Some research this morning reveals that they recently toured with Goblin in the States, and have previously re-scored a number of other cult films.

It's a shame that last night's haunting, powerful vocals are barely represented on the vinyl release of NOTLD, because their impact, live in front of the film, was immeasurable. The word transcendent comes to mind, making this my favourite viewing of Romero's seminal classic to date. The experience gave me a new and deeper appreciation of the film: the radicalism of its civil rights theme, its gorgeously lit black and white cinematography and wonderful editing, both courtesy of a young and hungry Romero. It throws into sharp focus just how talented and utterly electric the young Pittsburgh artist was. This film was dangerous, and exactly half a century later is still vitally important.

If you get a chance to see this show (especially with vocal accompaniment), don't sleep on it!

Yeah, they're dead. They're all messed up.