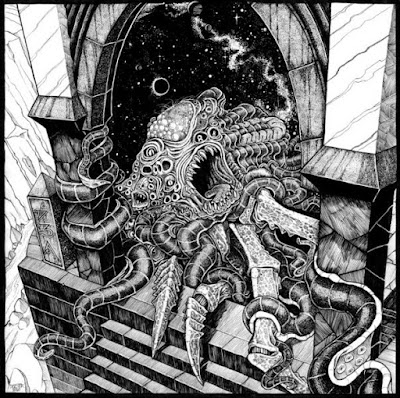 I can't contain my excitement about this news. The whole net is reporting today that Guillermo del Toro's long in development Lovecraft adaptation At The Mountains Of Madness is going to be his next production. This is particularly good news for people who've been following it's creeping, crawling progress, because only just recently the project was depressingly declared as being all but 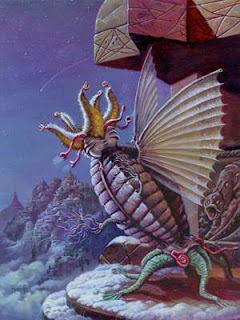 dead. That news came as a double blow, right after the news that del Toro finally walked away from the floundering Hobbit movies. Right now I couldn't care less if The Hobbit ever gets made. I just want to see Madness.
The really awesome thing about this announcement is that it looks like the movie is going to be bankrolled by none other than James Cameron. Now, other than his cool production design, with Bob Skotak, on Galaxy Of Terror, I'm not a big fan of the uber director's work (ok, I love ALIENS too). BUT, his involvement as producer bodes very well for the successful realisation of GDT's vision for Madness. Guillermo has said for years that Madness will be a very difficult film to get made because it needs to be hugely expensive at the same time as being almost impossible to market. In his own words:

"ATMOM is a delicate project to push through a studio: no love interest, no female characters, no happy ending...

But I believe it's time to resurrect the big tentpole horror movie. The event horror movie. Like THE EXORCIST was, or THE SHINING or ALIEN or JAWS in their time..."

... in other words, having Cameron on board - with all his money, clout and technological resources - is just what this sprawling nightmare epic needs. Cyclopean alien cities, Elder Things, Shoggoths... terror, blood and madness in the Antarctic wastes. Pre-production starts soon. It could be lensing as soon as this time next year. FUCK YES.
Posted by Aylmer at 17:11

Email ThisBlogThis!Share to TwitterShare to FacebookShare to Pinterest
Labels: At The Mountains Of Madness, Guillermo del Toro, H.P. Lovecraft