Sorting through the mire of cinematic cellulite that the movie factories are preparing to force-feed us over the next few years, you can always find a few embryonic films that stand out as having the potential to be great. Here I'll rant about three such genre projects I'm excited about - all adaptations of beloved books, all in very early stages of development. Two are already attached to established heavy-weight directors and are passion projects for each one. The third seems to be floundering in development hell and I'm not sure who - if anyone - is attached to it at the moment. So, to our first: 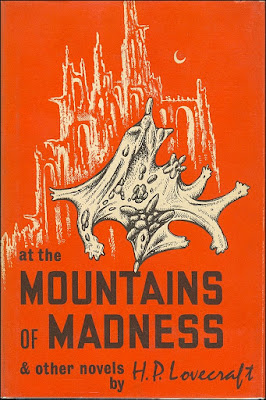 At The Mountains Of Madness

There's a plethora of movies out there based on the works of Howard Phillips Lovecraft, and even more that have simply plundered his pulp SF/horror for it's rich ideas. Of the former, few have been very good at all, with the obvious exceptions of Stuart Gordon's films and a handful of others. It seems that the Lovecraftian rather than the adaptations have yielded better results, with great films like Carpenter's The Thing and In The Mouth Of Madness, Fulci's The Beyond, Frank Darabont's The Mist and Eric Valette's Malefique amongst them.

Adaptations of HPL's stories (e.g. the Gordon/Yuzna films & The Dunwich Horror), for all that I love them, have often followed a similar formula, i.e. low budgets with a tendency towards campiness, while taking huge liberties with the original storylines (not always the film-maker's fault, as Lovecraft's stories often have a skeletal plot fleshed out with an over-abundance of flowery prose). The one thing we've never seen is a serious take on the material with a budget big enough to fully realise Lovecraft's eldritch vision.

Enter Guillermo del Toro's long-mooted, big budget adaptation of At The Mountains Of Madness. Lovecraft's vivid mythology of alien dimensions encroaching on our own, and cosmic evil lurking at the threshold of our existence, is massive in scope and has never been done justice on the silver screen. Mountains lends itself perfectly to a BIG production with it's sweeping Antarctic landscapes, huge mountain-ranges, monolithic alien ruins and giant Shoggoths. GDT's intention is to stay true to the novella by making it a period-piece and taking it all deadly seriously, without making compromises like a romantic sub-plot or happy ending. The problem up until now has been getting a studio to fund his Yog Sothoth-sized nightmare epic, but perhaps after the inevitable success of the Hobbit films someone will throw a few hundred million his way.

Given that the first of the Hobbit movies isn't hitting for about three years, and that the jolly Mexican genius (seriously, at a Q&A for a screening of Hellboy II, I was freaked out by the intimidating depth of his intelligence) also has his Frankenstein in development, At The Mountains Of Madness probably won't shamble and slither it's way onto screens for another eight to ten years. Will we still even have movie theatres then? Maybe GDT will just beam it straight into our heads.
Posted by Aylmer at 12:52

Email ThisBlogThis!Share to TwitterShare to FacebookShare to Pinterest
Labels: At The Mountains Of Madness, Guillermo del Toro, H.P. Lovecraft