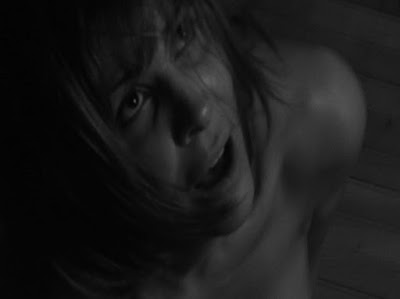 Jeremiah Kipp's impressive short film Contact has recently garnered him enough attention to land him his first feature length directorial job (Swine, featuring Tom Savini in a juicy role as a homicidal maniac!)... and it's not hard to see why. It's also earned raves from horror legends Frank Henenlotter and Larry Fessenden, among others.
Beautifully shot in dreamlike black & white, the film features excellent performances, particularly from it's lead, New York actress Zoe Daelman Chlanda. Although almost completely dialogue-free, the outstanding cast convey all the subtle emotion required to make Contact a thought provoking and memorable experience. Personally, I was blown away by the oppressive, sinister sound design, that immediately got under my skin and had me paying close attention. I'm a big fan of sound design being a feature in horror movies and this is some of the best work I've heard in ages. The understated score complements it well, and the whole comes off as sounding like Eraserhead if it were scored by Howard Shore circa Videodrome.

So what's on this little horror film's mind? Perhaps you should go watch it first. You can do that HERE. Go ahead, I'll wait... 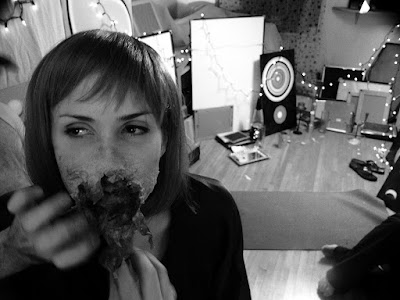 Have you ever looked at a friend, lover or long-term partner, and suddenly thought to yourself "who is this person, and why are we really together?". Realised that your knowledge and understanding of them might only be very superficial, and that you may in fact be sharing your house and life with a total stranger?

It's a very unsettling and tough moment of human realisation, and difficult to face. It's hard because it forces one to look at a very painful truth... that in the end, no matter how many people we surround ourselves with, we are all - every one of us - very much alone. And the ultimate outcome of that fact is that when we die... it's an experience that we all face alone. This is true horror. Primal horror.

I think the hallucinogenic trip that the two lovers at the heart of the film's narrative take together serves to illustrate this perfectly. Profound drug experiences, particularly psychedelic ones, are capable of stripping away our superficial "masks" and exposing a more raw, truthful self beneath. Zoe Daelman Chlanda's character sees through the veneer of her boyfriend's charm, and into an interior that may be more selfish and possessive than he outwardly appears. To recognise ulterior motives in someone you trust can be a very painful experience.

The more disturbing relationship in Contact, however, is between Chlanda's character and her father. His character is cold and difficult to read because he maintains a rigidly controlled exterior. There are indications though, that all is not right between father and daughter. Does she feel guilt for something? Was he abusive? Is his abuse the reason for her freakout while on the drug? The unanswered question about whether their contact at the end is caring and loving, or tainted with something darker makes for a thought provoking conclusion. 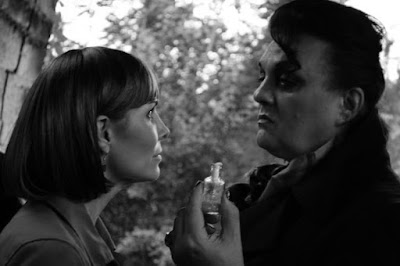 I asked Jeremiah a few questions about Contact, and his answers below make for good reading:

EYE: I see some Cronenberg influence in the body horror aspect of the drug hallucinations. Also parts of the minimalist score remind me a little of early Howard Shore, e.g. Videodrome. Is that the case, or am I just projecting?
JK: Cronenberg is one of the masters of the genre, using body horror imagery in a suggestive way. It's impossible not to feel some influence when you're using a gore effect as an extension of a human emotion or fear. In eXistenZ, the Jude Law character expresses a very specific fear of penetration; in The Fly our hero is rotting away and transforming into a giant insect, which can stand in for any number of diseases that eat away a human being. Our main effect was two people kissing and their faces fuse together, so the couple is literally stuck together and the woman has to tear herself away from him - it's a way of dramatizing that fear of connection, and who we are connected to. But while Cronenberg was an inspiration, the image actually was inspired by a painting by Edward Munch called "The Kiss", where lovers are intertwined and seem to be molding into one entity.
While I don't specifically think the great Howard Shore's name came up, the beautifully minimalist score by Tom Burns has been compared to horror movies from the 1970s/80s that were very spare. We didn't talk about other composers; I think Tom was responding to the fact that this movie was pared down to the essential; plot, character, even the image is black and white, so he responded accordingly with his music. But I'm sure he'd be honored and humbled by the comparison to Shore, one of the most powerful film composers of our time.
EYE: I'm a bit slow on ambiguous, subtle plotting and metaphor etc. Can you please elaborate briefly on any subtext, message, or whatever that may exist in the film? Or should it just be taken on face value?
JK: I'm unable to handle ambiguity either. If the movie is open to the viewer for interpretation, I hope it's because the movie is, in fact, very specific. When you're directing actors, they need to understand what the characters want, how they go about getting that, where they come from and where they are going. I don't think it's possible to do that if the logic of the movie is fuzzy. That said, we also pared down the movie to the essential, so it could be told visually instead of through dialogue. The characters are presented as archetypes (the lovers, the parents, the dealer, etc) and because of that, I think the audience has more room to use their imagination. They can fill in a lot, as long as you have retained a logic in your movie no matter how metaphoric it may seem. The subtext has been interpreted as "don't use drugs" or "it's difficult to take an emotional plunge" depending on who is watching the movie. Let's just say that the title of the movie is CONTACT, and that if you ask yourself "how are the characters making contact in each scene?" you'll have an easy road map for navigating the film. I didn't set out to make a deliberately complex movie; I think if read on an intuitive or emotional level, the movie will reveal what it is. I hope people enjoy the film, or are moved, or shaken, or affected in some way; we made this movie for an audience, not for ourselves.
EYE: Are you taking it on the festival circuit?
JK: We decided not to take the film along the festival circuit. I wanted to put it online as an experiment and see if we could potentially find a wider audience that way. I think the web has changed the way short films can get out there into the world. festivals are great, and some international fests have picked up Contact and are screening it. We had fun making subtitles for the two or three lines of dialogue in the movie. But the web was a way of allowing everyone to see the work: audiences, critics, other filmmakers and producers. As it turns out, two producers saw the movie and hired me to direct a feature starring Tom Savini as a result of seeing it online. But I think it's worth pointing out that while we are all very proud of the film, we didn't set out to make a calling card. Contact was made because we set out to make the best film we could, and it was commissioned by a Halloween film festival in New York that only demanded the film had gore and nudity. It was made for an incredibly low budget ($600) and that may have forced us to be more creative than we would have been otherwise.