"As he sat on his balcony eating the dog..." 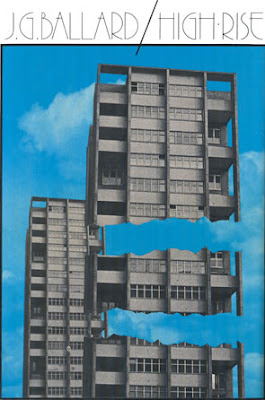 Some exciting news emerged tonight (as reported by bloody disgusting) that Vincenzo Natali is still attached to his long-in-gestation adaptation of J.G. Ballard's seminal SF novel High-Rise. The project has been on his slate for several years now, but I've been wondering for a while if he might have abandoned it. I've always thought High-Rise suited Natali perfectly. It's thematically similar to Cube in that it's about ordinary people dropping their veneer of civility and resorting to violence in a desperate and claustrophobic situation. Another similarity to Cube is the central role that the architectural environment plays in the story, how it influences and defines the character's actions.
Our bizarrely evolving relationship to technology and the urban environment is a theme that runs through my favourite Ballard stories (Crash, Concrete Island & High-Rise) and I don't think that the ideas he postulated in those novels have dated at all. In fact I think they're more relevant now than when they were written, and show a real prescience to Ballard's vision of where we're headed as a society (it's not optimistic).

Having only just lost this great SF writer last April, it's heartening to know that one of his most beloved novels is in the capable hands of an intelligent, independent film-maker. Too many of Philip K. Dick's SF stories have been reduced to dumbed-down action fests, but with first Cronenberg's Crash and now Natali at the helm of High-Rise, Ballard's cinematic legacy may fare better.
Posted by Aylmer at 22:29