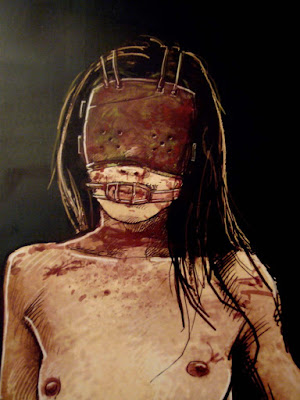 Here's another soundtrack, this time from the bludgeoning, nihilistic French shocker Martyrs, directed by Pascal Laugier with an original score by Seppuku Paradigm.

A brief search of the web is all it takes to get an idea of how divisive this movie is amongst horror fans. It sounds like a cliche, but Martyrs really is a film that seems to be almost universally loved or loathed, with not many people reacting with ambivalence. That it elicits such strong reactions in people is a testament to the film's devastating power.

A lot of fans of really violent movies were angered and offended by the violence in Martyrs because it's not entertaining or cathartic. The final act in particular is a grim, prolonged and extremely unpleasant depiction of one of the main protagonists being tortured, humiliated and beaten, that is about as far away from "fun" violence as you can get. In this respect it succeeds at forcing the viewer to really feel empathy for the victim of this atrocity far more effectively than Michael Haneke's Funny Games, because it doesn't indulge in Haneke's childish manipulation and insulting condescension. I don't know if that was Pascal Laugier's intention when making Martyrs, but when a Toronto Film Fest attendee (at a post-screening Q&A) pompously asked him if he had seen Haneke's film(s) and then more or less called Laugier disgusting and morally bankrupt for making Martyrs, he responded by saying "I hate Michael Haneke, I hate Funny Games" and then went on to describe his film as the "Anti-Funny Games". He could go on to never make another good movie, and he'd still be heroic to me, just for saying that. I was intrigued by Games when it first came out, but on subsequent viewings have come to really resent it for the way in which Haneke presumes to indict all viewers for revelling in violence, without giving them any credit for being thoughtful or empathetic. A truly stupid and myopic generalisation. Honestly, who does he think he is? 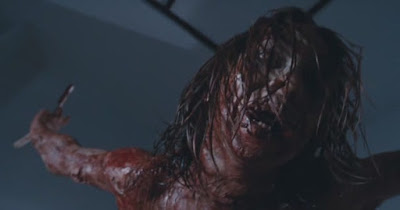 Of course this is only one small aspect of what makes Martyrs the masterpiece that it is. The two central performances from Morjana Alaoui and Mylène Jampanoï are heartbreakingly good and it's obvious in every frame of their screen-time just how much they sacrificed of themselves for this little film. The cinematography and stark production design are excellent, as is Benoît Lestang's incredible and disturbing make-up FX (he was a great talent who tragically took his own life in 2008). A lot of people dislike the abrupt change at Martyrs' mid-point into kind of metaphysical SF, but for me it works perfectly, and the end (which Fangoria's Tony Timpone accurately described as "approaching Kubrickian transcendence") literally had my jaw agape and my eyes bugging.

The score, by Parisian experimental electronic/rock band Seppuku Paradigm (who had previously scored the low budget French SF movie Eden Log) is by turns somber, mournful, tense and haunting with a few good stings like At Night In The Dormitory. Once, in the track Crisis, it explodes into throbbing Goblin worship that makes a very powerful moment in the film even more potent. It's a great little track, but at under a minute long I really wish they'd expanded it for the soundtrack. Martyrs wraps-up with the languidly paced, dreamy-melancholy of Your Witness that is perfect over the end credits to allow you to just numbly stare at the screen and begin to recompose yourself after being pummelled into a state of twitchy shock.