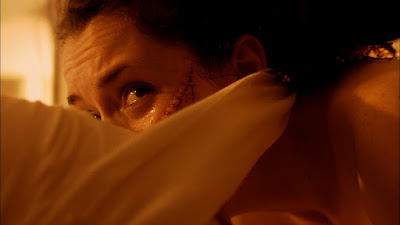 One of the films at the top of my to-see list for 2010 is Tom Six's controversial The Human Centipede (First Sequence). The story revolves around mad scientist Dr. Heiter's perverse experiment on a trio of captive victims to surgically graft them into a single organism with a common digestive system. To put it more bluntly, he sews them together, asshole to mouth.

The film is apparently intelligent, blackly comic and squirm-inducingly grueling without relying on too much gore. The word is that Six consulted a surgeon to make sure that the medical procedures in the film were realistic in order to give the goings-on a pseudo-scientific veracity.

Festival-goers are raving about Dieter Laser's tour de force performance as the insane Dr. Heiter, and it earned him the award for Best Actor at last year's Fantastic Fest (where the film also scored Best Feature). The cold-blooded, sadistic mad scientist is one of the most beloved archetypes in the SF/horror pantheon, and it's been too long since we've had a really memorable one chew up scenery on the big screen (the last great ones that spring to mind are from the '80s: Herbert West, Crawford Tillinghast, Dr. Logan, Brian O'Blivion, Dr. Hal Raglan et al). The performances of the three unfortunates who comprise the centipede are also supposed to be excellent, so I imagine it's genuine sympathy for their disgusting plight that makes this disturbing little horror movie work as well as the positive buzz suggests it does. I cannot wait to be assaulted by this flick (and it's in-development sequel The Human Centipede II (Full Sequence)!

So with the overt references to Cronenberg in last years SF masterpiece District 9 (the deterioration and subsequent metamorphosis of Wikus' body) and the "baby horror" of Inside and Grace, are we witnessing the birth of a fully-fledged body horror sub-genre? I really hope so.