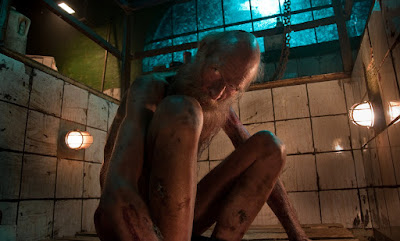 A few quick thoughts on Rare Exports, which I caught a couple of weeks ago at the Fantastic Planet SF & Fantasy Film Fest.

This odd Finnish production has generated quite a bit of positive buzz on the festival circuit, and it's not hard to see why. Despite some unfortunate flaws in the last 20 minutes, there's so much to like about Rare Exports up to that point that it's hard not to root for it. Two weeks on, and some of it's imagery has stuck to my brain like glue, proof that it's original premise and some incredible cinematography have made for something unique and memorable.

Reports that the tone of the movie is akin to 80's children's horror/fantasy like Poltergeist and Raiders Of The Lost Ark are spot on. As with those movies, it maintains that precarious balance between family-friendliness and darker, edgier, adult horror.

This is a refreshingly different kind of kid's movie than we're accustomed to in the US, UK, Australia, etc. Perhaps the "Finländare" have healthier, less prudish moral values then we're saddled with, because I was surprised to hear the word "fuck" uttered about ten times throughout (both in Finnish and English). Rare Exports also proudly flaunts a very high quotient of old man cock. There's enough of it on display here to lend gritty realism to at least two concentration camp dramas. Personally, I resent my culture's hypocritical double standard regarding profanity/nudity versus violence, so I applaud Jalmari Helander's copious use of expletives and "Joulupukki kulli" (yeah, that's Finnish for Santa Penis).

Rare Exports benefits from some nicely textured characters and an original premise, but it's real secret weapon is a constant barrage of impressive visuals (it took home top honours for cinematography at this years Sitges). The film opens on some panoramic shots of an incredible mountain location that had me picking my jaw up off the floor, and it doesn't let up from there. If nothing else, it's an insanely beautiful film, brimming with loads of creepy arctic atmosphere. My only real complaint is an over indulgence in CGI and Spielberg style action in the final minutes, spoiling the moodier atmosphere up to that point. It's a minor quibble though, and shouldn't put you off checking out this bizarre little rarity.
Posted by Aylmer at 23:37