Soundtrack: Phantom Of The Paradise 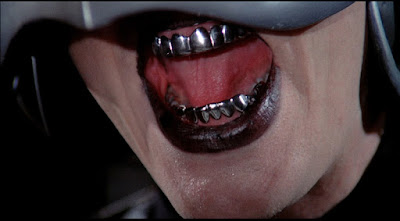 I first saw Brian De Palma's Phantom Of The Paradise at an afternoon matinee in 1976. I was eight years old. Sitting in the dark, watching The Undead strut and slice their way through "Somebody Super Like You", was an intense and overwhelming experience for me. It was my first exposure to the power and energy of rock, and I loved it so much that my folks bought me the LP soon after. Hour after hour I'd sit alone in my room, endlessly playing that record on my crappy little plastic turntable. Sadly, that album ended up as landfill in the early '80s when I became embarrassed to have it seen amongst my newly amassed collection of punk and hardcore. Ah, the follies of youth.

I rediscovered Phantom about ten years ago and it's a pretty special movie for me now. There's a lot to like about it, from the lavish production design (set dressing courtesy of a pre-Carrie Sissy Spacek) to Jessica Harper's coolly charismatic singing as Phoenix, and of course, the Phantom's awesome costume and chrome teeth.

So, have a listen to the final release from the now defunct Death Records, Phantom Of The Paradise. Just don't be surprised if you find a piece of Winslow Leach's face pressed into the vinyl. HERE.