It's been said before and I'll say it again: Grindhouse only really worked when seen in it's entirety, in a packed theatre with an appreciative crowd. I saw it twice that way and it was a blast. Taken out of context and in their longer cuts, Death Proof and Planet Terror are still a good time for lots of reasons (mostly for Kurt Russell in the one and rivers of gooey splatter in the other), but I just find them both to be a bit disappointing on their own. In the end it comes down to the fact that the four fake trailers in Grindhouse completely eclipsed the two movies. If Rodriguez and Tarantino had made a movie consisting of nothing but trailers, each one from a different guest director, it probably would have been an instant cult classic.

What I've got for you here is the unedited 7-minute "intermission" sequence (with the trailers by Rob Zombie, Edgar Wright and Eli Roth), ripped from the awesome (and expensive) 6-disc Japanese Grindhouse DVD. It's a really good quality 150MB .avi file and looks perfect. Please click on the roasted corpse. 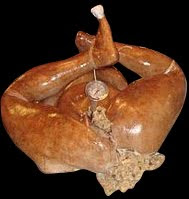