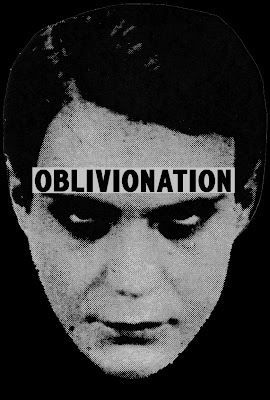 OBLIVIONATION is a brain meltingly raging hardcore punk band from Lowell, Massachusetts, in the U.S. of A. Most of the Mass. hardcore I'm familiar with is from Boston of course, so for interest's sake I looked Lowell up, and according to Wikipedia the town was the birthplace of the industrial revolution in the States. That's heavy. It was also the birthplace of a certain paragraph-challenged beatnik.

The thing about Oblivionation that sets them apart from the herd is that their searing, no-nonsense hardcore attack is backed up by some of the sharpest lyrics I've read in a while. The demo opener - "Compulsive Paranoia" - is the most perfectly articulated song about mental anguish since Black Flag's "Depression" (and the rest of side two of Damaged I guess). And as far as social critique goes, the next song on the demo, "Proud To Be Dumb", could pretty much be considered an anthem for our times:

You can read but you won't, you could care but you don't
Your culture's become comfortably dumb

Since discovering their demo late last year I've basically played it to death, so I'm impatiently waiting for their upcoming LP, Language Of Violence, to drop. They have a new EP in the works too, and both should be out by the end of the year. Oblivionation are made up of ex and current members of some other great Mass. bands including Bloodkrow Butcher, Raw Radar War and Out Cold. Get their demo + more below...

Crippling fear, it's what I live with