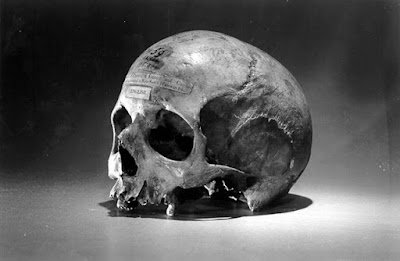 Hell's Gates: the treacherously narrow and shallow entrance to Macquarie Harbour on the west coast of Tasmania, named so by the hapless convicts whose fate it was to pass through it. Once through those ominous Gates, the starving and scurvy ridden wretches would disembark at their destination - the Macquarie Harbour Penal Station at Sarah Island. For many of those unfortunates it would, quite literally, be their final destination.

It's also the name I'm giving to this new weekly feature dedicated to Australian horror. Each week I'll endeavour to celebrate a different Aussie horror movie through posters, ephemera and behind the scenes pics etc. In the wake of Mark Hartley's brilliant Ozploitation doc Not Quite Hollywood, there seems to be a renewed international interest in Terror Australis, so I hope some of you degenerates get a kick out of this!

I can't think of a better way to start this than with the most notorious convict ever to pass through Hell's Gates - Alexander Pearce. That's his skull at top. The infamous cannibal convict is probably Australia's most enduring folk horror figure, being the subject of several biographies, documentaries, a couple of pop songs and - of course - horror movies. Some lurid info from Wiki:

Pearce led an escape from Macquarie Harbour Penal Settlement and became notorious for cannibalising his fellow escapees as they travelled through the West Coast of Tasmania.

Pearce was eventually captured near Hobart and confessed that he and the others had cannibalised each other over a period of weeks, he being the last survivor. Pearce and Greenhill had been the final two, each struggling to stay awake for days out of fear the other would kill him. Greenhill finally nodded off and Pearce killed him with an axe, then ate him. Pearce made it to the settled districts, being sheltered by a convict shepherd until he was captured several months later. The Hobart magistrate did not believe Pearce's cannibalism story and was convinced the others were still living as bushrangers. Pearce was returned to Sarah Island.

Within a year he escaped a second time, joined by a young convict named Thomas Cox. Pearce was captured within ten days. His captors found parts of Cox's body in Pearce's pockets, even though he still had food left. Pearce confessed that he had killed Cox because he was a hindrance to him. Pearce was taken to Hobart, where he was tried and convicted of murdering and cannibalising Thomas Cox. He was hanged at the Hobart Town Gaol at 9am on 19 July 1824, after receiving the last rites from a priest. It is reported that just before Pearce was hung, he said:

"Man’s flesh is delicious. It tastes far better than fish or pork."

No mention of chicken then? Strange because I've always found I've heard it tastes more like chicken.

Anyway, in the last couple of years we've seen two Pearce films, and they couldn't be more distinct from each other in style and substance... 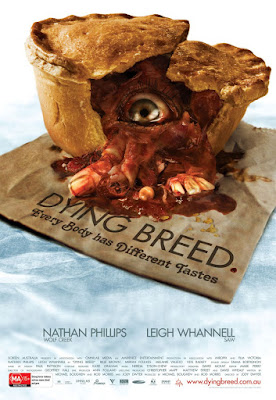 First up, Jody Dwyer's 2008 shocker Dying Breed. A flop at the Aussie box office, I personally enjoyed this less than original, but impressive debut. This one shifts the Pearce cannibal tale into a contemporary setting, by making the antagonists not the man himself, but his inbred descendants (the famous man-eater does make an appearance in a brief prologue sequence). You've seen The Hills Have Eyes and Texas Chainsaw, so there's nothing really new here, but there's still quite a lot to like about it. Shot on location in Tasmania in trying conditions, it has atmosphere to spare and looks fantastic - all rain, mist, mud and very cold looking forest. It's more than competently made, with good production values, decent turns from the thesps (even the annoying Leigh Whannell of Saw fame) and some tasty gore. I love this poster, which managed to raise the ire of our very own guardians of morality, the OFLC (our version of the MPAA/BBFC). 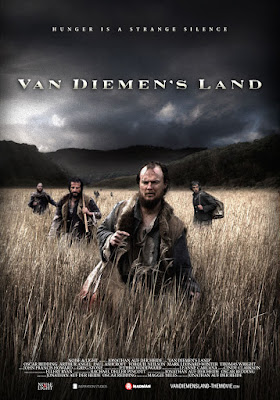 Released the following year, and existing on a different cinematic plane altogether, is Jonathan auf der Heide's more somber take on the grisly story - Van Diemen's Land. This one plays like Werner Herzog or Terrence Malick's take on the cannibal genre - slow burning, archly shot and obviously filmed on location (again in Tasmania) under unpleasant conditions and considerable duress. The results are astounding, showing off the grandeur of the Tassie forests, but twisting the beauty into a menacing Green Inferno - cold, hostile and utterly unsurvivable. This one won't be to everyone's tastes due to it's slow pace and emphasis on atmosphere over dialogue and action, but for the more patient viewer it's well worth the effort. 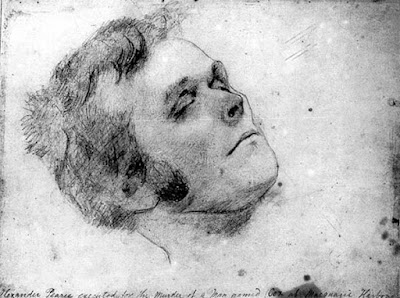 Death portrait of Pearce after his execution
Posted by Aylmer at 22:36