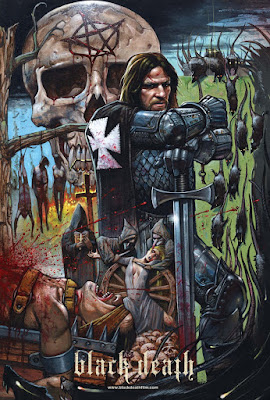 English auteur-in-the-making Christopher Smith failed to make an impression on me with his slasher debut Creep. Fortunately, his output since then has gone from strength to strength, revealing a versatile director with a broad and original vision. On his first four movies, I'm impressed with the ease at which he's stayed within the horror genre but moved so effortlessly between sub-genres. From Creep, to Severance and Triangle, each successive film has marked what feels like an almost exponential growth in maturity and intelligence.

The culmination of Smith's work so far is his slow-burning, bleakly apocalyptic medieval fantasy Black Death, which I thoroughly enjoyed. Behold these two recent posters for it by Simon Bisley, who did a similar one for Neil Marshall's Centurion last year. I like that these artworks create a connection between the two films, because, to my mind, they're tonally quite similar. In fact I think there's a kind of parallel synchronicity to Smith's and Marshall's careers so far, the two becoming more confident and skilled in tandem. It's definitely not a stretch to say that these two fellows - along with Simon Rumley - are leading the charge of the NWOBH invasion.

Speaking of which, UK horror has been in consistently fine form for the last few years. I'm frequently blown away by new British movies, seemingly popping up out of nowhere. For example, has anyone seen Outcast, directed by one Colm McCarthy? I saw it the other night and, despite a rather rote feeling conclusion, it's brilliant! One of the coolest occult horror flicks I've ever seen, and bound for kvlt status I'm sure. In terms of pagan, witchy mysticism, it may well overshadow Robin Hardy's upcoming Wicker Man sequel, The Wicker Tree, which - if the trailer is any indication - is looking worryingly hokie (please prove me wrong Mr. Hardy). 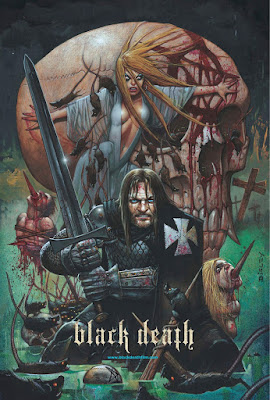