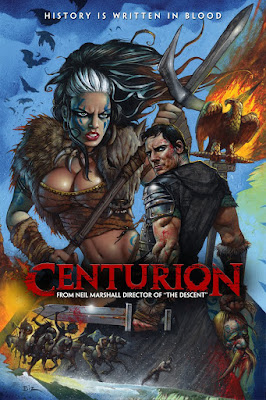 This one goes out to all my friends in the US.
As is sometimes inexplicably the case, we got our theatrical run of Neil Marshall's Centurion a full month before you guys (we usually get same-day releasing, or weeks/months after the US release). Anyway, I saw it last week and it's pretty awesome.

It's not perfect by any means, but it's the kind of fun, bloody movie that I'll probably grow very fond of as time goes by. Centurion is a throwback to the violent, no-bullshit sword & sandal flicks of the '80's like Excalibur and Conan The Barbarian. And it's that very lack of bullshit that makes it so cool. Despite being "based" on the massacre of the Roman Ninth Legion, it's completely unencumbered by any pretense at real historical accuracy (the whole Ninth Legion thing is really just a device to build the story on). It's not a moralistic message movie, and it definitely isn't trying to elevate itself to the status of highbrow period movie. It's also free of all the hyper-stylised, CGI laden visuals that have become popular in the wake of 300. Like I said, no bullshit.

Centurion is just a good old-fashioned, blood and gore soaked BATTLE movie. The gore is mostly practical (with some bright red CG stuff splattered around) and it's pretty stunning. Throats and jugulars are slashed; chests are sliced; heads are severed and bisected; bodies are stabbed, punctured and eviscerated. Limbs don't even stand a chance - they're history. Usually with cinematic sword fighting it's "clang, clang, clang, clang, slice", but there's a battle in Centurion that is more like "slice, lop, stab, slice, squelch, splat, slice" - blow after blow, steel meeting only flesh. Just killing and dying and crawling through the blood-soaked mud and more dying. It's awesome.

The bleakly beautiful, mist-shrouded Scottish locations and Frazetta-esque design of the Pictish warriors add to those glorious depictions of battle to make Centurion a Metal movie par excellence. Just look at axe-throwing Mantlers Barbarian below. Metal-As-Fuck. And there's a pack of vicious, hungry wolves too.

Is it perfect? Hell no. The dialogue is often clumsy, and the third act devolves into a pretty standard chase scenario, also suffering from an awkward subplot that feels out of place near the end of the film. But much like Marshall's last film - the Carpenter homage Doomsday - this is a B-movie that doesn't pretend to be, or want to be, anything but a good time for genre fans. So it's pretty easy to forgive it it's flaws.

It is what it is: atmospheric vistas of fog-shrouded forests & desolate moors; blood-slick battlefields; grimy centurions; lethal barbarian babes and violent death dealt by the cold steel and iron of gladius and spear. Centurion comes with my recommendation and a rating of four Hessian Mantler Boners out of five.
Posted by Aylmer at 17:45