You Are My Lucky Star 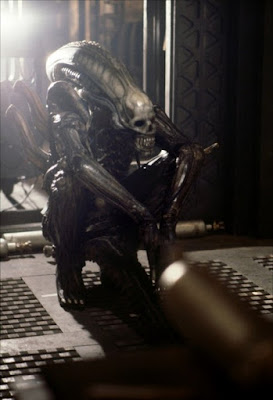 I pinched the above photo off that website run by the cheerful, portly guy from Austin TX. It's just too cool not to repost. Alien occupies an unassailable position on my top-five list, my Mount Rushmore of movies if you will, and after 31 years of fanatical worship, it's not everyday that I'm treated to a behind the scenes pic that I haven't seen before. This one of Bolaji Badejo relaxing between takes is a real beauty.

Giger's groundbreaking design work on Alien has been watered down with each successive (and progressively worse) entry in the saga. I've always intensely disliked the look of the designs for Alien 3 and Resurrection, and the less said about the AVP shitfests the better. Those two movies bled every remaining drop of mystique and fear out of the monster, to the point that it just isn't scary anymore. The only post-Alien modifications to Giger's design that I like are the xenomorphs in Aliens. Similarly, the queen in Aliens is the only addition to the Swiss artist's work that I like. She's scary and still works so well simply because she's a big, entirely practical creation - impressive and lifelike. And despite James Cameron completely shafting Giger, Stan Winston obviously respected his predecessor's work. You can see it in the details of his design for the queen.

All that aside though, it's when I see rare pics such as the above, showing a fresh perspective of Giger's work, that I'm reminded that the alien is still the scariest movie monster of all time (with Rob Bottin's incredible work on The Thing very close behind). It takes me back to being 11-years-old in 1979 again, reverently thumbing through the Alien photo-novel at my local bookshop, eyes agape and imagination running wild. 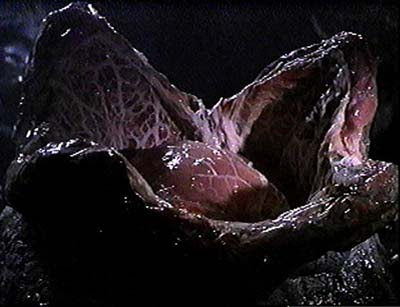 Giger's alien wasn't just a man in a suit. It was a fully realised and believable biological organism with a complex life cycle - egg, facehugger, chestburster, adult. The wet entrail-like bowels of it's egg; the facehugger's translucently pallid flesh and visceral underbelly; the sloughed-off skin... it's all just so intensely real.

"I have confirmed that he's got an outer layer of protein polysaccharides.
Has a funny habit of shedding his cells and replacing them with polarized silicon,
which gives him a prolonged resistance to adverse environmental conditions.
Is that enough?"
Added to that organic realism, Giger's creature designs look menacing, lethal, and above all, primordially evil (all of which is reinforced by the desolate, hostile environment of planetoid Acheron and the haunted tomb of the derelict ship and egg chamber). That behind the scenes pic at the top, showing the head with it's "dome" removed, reminds me of just how malevolent the alien is. On one level it's just an animal, a "perfect organism" with "structural perfection [that] is matched only by its hostility", but underlying that is a creeping cosmic evil that could only be compared to that described by Lovecraft... and could only have come from the truly unhinged imagination of H.R. Giger. 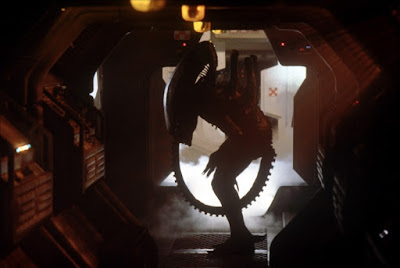 "It's adapted remarkably well to our atmosphere
considering its nutritional requirements."
It's stuff that would have given Lovecraft himself nightmares, and in spite of some of the travesties that have followed in the wake of the 1979 masterpiece, Giger's disturbing vision still holds up hideously to this day.
Posted by Aylmer at 02:48