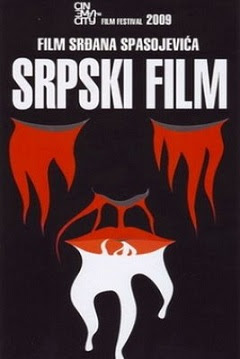 It's probably lazy when writing about film to continually resort to comparison with other films, but I still find myself doing it a lot. Perhaps it's particularly hard to avoid when discussing horror, because it's a genre that's continually feeding off of itself for new ideas. To paraphrase something I read at Fangoria recently, horror cinema gets by for the most part by cyclically regurgitating popular tropes and cliches, delivering what the fans are perceived to be hungering for at the time. The industry toils along in this opportunistic fashion, becoming more and more predictable and stale, until the next fresh idea is introduced in a new groundbreaking and original film. Yet sometimes a movie is original enough to stand on it's own, while comparisons to previous movies are still impossible to avoid. One such movie is Srdjan Spasojevic's A Serbian Film. 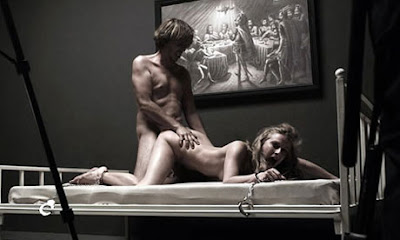 A Serbian Film feels as if Spasojevic watched the Hostel movies, and rather than being insulted by Roth's exaggerated perception of the troubles in post-soviet eastern Europe, saw it as a challenge to up the ante as far as disgust and brutality.

Above a subtext about American ignorance and xenophobia, Hostel is about the potential for entrepreneurial capitalists to exploit the instability that has resulted from rapid social, economic and political changes in the region (former Czechoslovakia in Hostel). However, it does so using a premise that is absurdly far fetched, requiring a major suspension of disbelief to go along with.

A Serbian Film on the other hand is grounded in a terror that is all too real and which is frequently seen in the news and dramatised on TV - the burgeoning illegal sex slave trade. The only really unrealistic element of Spasojevic's film is the snuff-industry angle, an urban myth that has been shown to be just that - a myth (see David Kerekes' & David Slater's excellent Killing For Culture: An Illustrated History Of Death Film From Mondo To Snuff published by Creation Books). Beyond that though, the events depicted in A Serbian Film are believable and are all the more appalling for that realism. Compounded with that sense of reality, the explicitly depicted atrocities in A Serbian Film make the violence in Roth's movies pale by comparison, making the whole experience that much more visceral, disturbing and just plain vile.

Another recent movie that has to be mentioned when talking about A Serbian Film (and Hostel I & II) is Martyrs. Beyond the similarities in premise (highly organised secret societies with paramilitary elements; torture and killing for ideological and financial motives) the four movies share a similar visual aesthetic. They're all shot, lit and colour graded with a kind of hyper-real slickness (particularly Srpski and the Hostel movies), and in the production design of the secret institutions all four films share a clinical, futuristic look that is more akin to science fiction movies than horror.

Beyond that comparison with Martyrs though, the more obvious similarity between the two movies is that it's the current Euro-horror film that is both topical and utterly transgressive in it's violence. This year's most talked about cult film for hardcore horror freaks. So, I guess my final word on A Serbian Film is what I see as the differences in motivation for Laugier and Spasojevic.

Almost every review I've read for Spasojevic's disgust-fest mentions the almost impenetrable ambiguity of it's "message" about the current state of affairs in Serbia. Western observers are looking for a meaning beneath it's violence and coming up with an almost unanimous cry of "I can't work it out, I guess you have to be Serbian to understand it". I can't fault all of these reviewers for seeking that deeper meaning, because I strongly believe that in much the same way as T.F. Mous' notorious Men Behind The Sun, Srpski is posing as a message movie to give it more gravitas, but ultimately it's little more than a very well made, highly memorable exploitation flick. Perhaps in both cases there was an original "higher" intention that was eventually lost in the desire to simply be as nasty as possible.

Martyrs could also be criticised for having a dubious and ambiguous meaning, but what Martyrs has in spades that Srpski lacks... is heart. As mean spirited and hard to watch as it is, it's a deeply emotive and affecting movie because you care for Lucie and Anna and witnessing their fate is heartbreaking. The horrible fate of Milos and his family did not elicit that emotion in me, just a dull sense of shock and revulsion.

I think the difference in the two director's intentions is most evident in Laugier's widely publicised assertions that the writing of Martyrs came from a deeply heartfelt place within him, at a time when he was going through a difficult period of particularly black depression. When I watch his film, I can see and feel all that emotion up on the screen. When I watch Spasojevic's Film I see a cynical, sneering exercise in depravity lurking shallowly beneath a thin veneer of sociopolitical commentary about porn, the illegal sex trade and some dodgy allusions to the Yugoslav wars. Just another exploitation flick, albeit one of the most disgusting ones I've ever seen.

After all that you might think that I hated A Serbian Film...

... but I actually really liked it.

Why? Because - like you - I'm a card carrying sicko!