I'm not really buying into the whole "Alien day" thing, because in the end it's just another marketing ploy. That said, if every April 26 brings us Alien artworks of the standard displayed below, then why am I complaining?

Laurent Durieux's "Alien" is a thing of haunting beauty. I like how he's worked the creature's head into the derelict ship. After seeing that, the whole surrounding landscape becomes suggestive of the xenomorph's form. 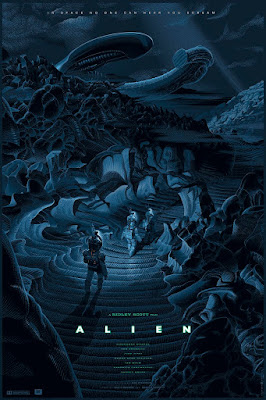 Moving from Alien to Aliens, Mark Englert's "should we take a look inside?" is a real stunner too. Lots of cool details in this one. Planet Calpamos and LV-426's two sister moons loom ominously in the sky. Hadley's Hope and the Atmosphere Processing Plant are visible in the distance. Turn the lights out and Newt and her ill-fated family disappear. In the distance the plant's reactor is detonating, and the Sulaco's final dropship can be seen heading for orbit with four desperate survivors aboard. A fifth passenger hitches a ride. 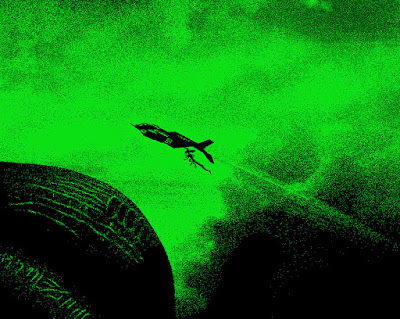 As a bonus here's Englert's previous Alien painting (and a colour variant), "you are my lucky star". The bane of the Nostromo drifts into space* after being blasted off the stern of the Narcissus.

*Here's a question for Alien aficionados: at the end of the film is the Nostromo still within the Zeta Reticuli system, or is it in interstellar space? I've always assumed the ship is still in-system as its crew haven't yet gone into hypersleep.