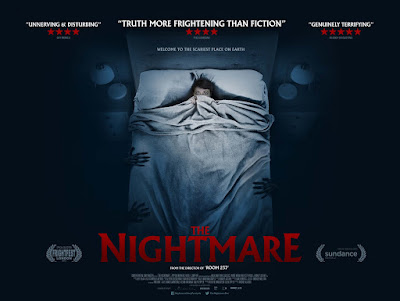 Sleep paralysis is a phenomenon in which a person either during falling asleep (hypnagogia) or awakening (hypnopompia), temporarily experiences an inability to move, speak, or react.

It is a transitional state between wakefulness and sleep, characterized by muscle atonia (muscle weakness). It is often accompanied by terrifying hallucinations (such as an intruder in the room) to which one is unable to react due to paralysis, and physical experiences (such as strong current running through the upper body).

One hypothesis is that it results from disrupted REM sleep, which normally induces complete muscle atonia to prevent sleepers from acting out their dreams. Sleep paralysis has been linked to disorders such as narcolepsy, migraines, anxiety disorders, and obstructive sleep apnea; however, it can also occur in isolation. 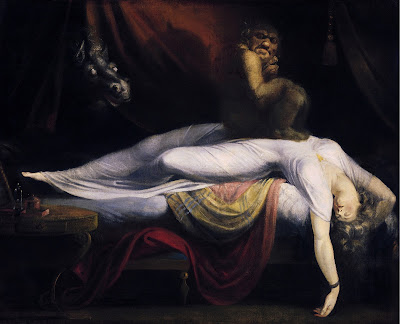 In a year that saw some legitimately terrifying moments of cinematic horror (It Follows, Bone Tomahawk), it's amazing that 2015's scariest horror movie is a documentary.

Rodney Ascher's followup to Room 237 is a sincere exploration of sleep paralysis, sincere because he himself has been a "victim" of the phenomenon. It is a film that gets under your skin, and then creeps into your thoughts in very disconcerting ways. It will stick with you and haunt you.

The Nightmare is a two pronged assault. First come the creepy anecdotes from a number of very believable interview subjects, all of whom have been plagued by sleep paralysis for very long periods, if not their entire lives. Then the simple but extremely effective reenactments of their testimonies up the ante to wide-eyed terror.

The thing that really sets off the domino cascade of fear is the realisation that all of The Nightmare's subjects - a varied cross section of people from all walks of life and degrees of mental stability* - seem to share very similar, if not identical, hallucinations. Intrusion and intimate abuse from shadowy interlopers, often described as being so black as to have no visible features other than burning red eyes. The descriptions of some sufferer's experiences are so similar as to be very alarming, but even with the overall differences there's a commonality to all of it. A demonic, malevolent presence that fills the victim with an overwhelming feeling of doom, dread and impending harm. There's also a disturbing throughline that sleep paralysis may be somehow transferred mentally from person to person, like a sort of conceptual virus (too far out to give much credence to, but still food for thought). 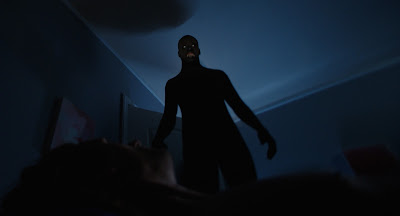 As a lifelong horror fan, the revelations and insights in this documentary affected me quite profoundly. A segment of the film draws a number of striking parallels between the hallucinatory effects of sleep paralysis and much of the imagery in the folklore and urban legends that are the basis of our horror fiction (not just in western culture, but throughout the world). A strong case is made that much of our old folklore and modern fiction - demons; ghosts; dream/sleep related horror such as A Nightmare on Elm Street; dimensional horror in the vein of Insidious; alien abduction stories - has drawn its inspiration and been directly influenced by this terrifying sleep disorder. To watch The Nightmare is to have an epiphany about the true nature and origins of the genre.

Then there's my own stories. I was once quite close to a person with profound schizophrenia. She told me that she could only sleep during the day, because trying to do so at night invariably resulted in uncontrollable episodes of "astral travel". Night after night, she would go to a place where she was confronted by a malevolent presence that she could only describe as "the devil".

An ex-girlfriend of mine would often wake into a state of semi-conscious paralysis. During these episodes she was petrified of a "presence" that lived behind an oil heater mounted on the wall near her bed.

Shortly after completion of my cancer treatment, I had two experiences myself. The first was while wide awake, the other while falling asleep. In both instances I became utterly paralysed and found myself suspended in what felt like an infinite void. I had complete temporary amnesia, no awareness or memory of who I was or where I came from. The only thing I was aware of was that I had no control, and I was to be tortured, without reprieve, by some kind of malevolent entity for the rest of eternity. A classical interpretation of hell. Both instances felt like they were over in under a minute, but for those few seconds I was the most terrified I have ever been in my life. Dread and fear that absolutely eclipses anything that I've ever known. In both cases I was badly rattled by the experience for days after. I've put these two episodes down to the weakened physical and mental state that I was in after my illness and treatment. I've since wondered if they may have been related to dissociative fugue or fugue state.

Have you or anyone you know ever had a similar experience?


*The Nightmare's interview subjects run the gamut from grounded and sane to possibly drug-affected, with two people who come across as borderline schizophrenic. The latter two are the worst affected. Are they that way due to a life of anguish and stress from coping with sleep paralysis, or is their mental state the cause of the paralysis? I'll leave that for you to decide. 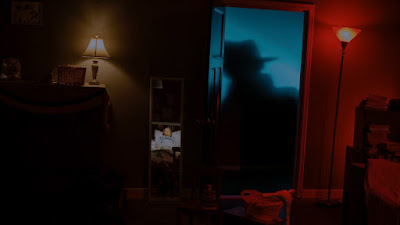