In other words, these two weirdos from Sweden couldn't care less about the trends that are dominating the DIY punk™ landscape in 2015. Since their mutated birth in 2011 Pusrad's only mission is to pump out ultra-fast, short, tight, clean-sounding thrash jams. An endless avalanche of manic stop/starts and fist pumping riffs that are never given the time to overstay their welcome. It's music that sounds like it was made by an anal-retentive, paranoid robot on meth. It rules. 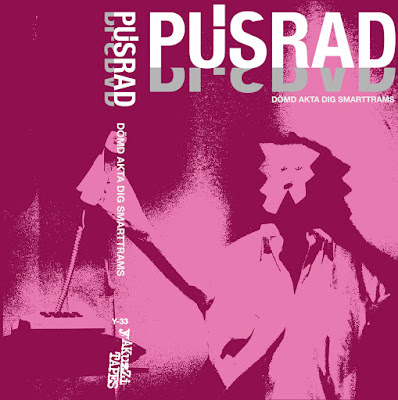 Their sweetest offering to date is still the 31 Premature Ejaculations tape, which compiles the 19 track Dömd 12'' with the Akta Dig and Smarttrams 7''s (all released in 2012). You get 31 spurts of lightning-speed insanity that wisely climaxes with the best material on the tape, Smarttrams (which features their sickest ever guitar tone and riffs that are as catchy as Herpes). The only problem with Ejaculations is that Dömd's surprise melodic track, "Errare humanum est", only lasts 35 seconds. The song is sheer musical perfection, and it's a crime that it was never expanded to a couple of minutes long. But as the title of the tape suggests, Pusrad never fully satisfy, they just leave you wanting more.

The onslaught of rippage continues with 2013's Modern Anatomi E.P. (on which they slow down and break the one minute barrier(!) for another melodic beauty, "Maskineri") and last year's Erarre Humanum Est 12". The latter 24 track scorcher finds the boys applying the brakes with a consistently slower tempo and more melodic approach. The minute barrier gets blown out twice on this one, and as good as Pusrad are at supersonic speeds, the 1:06 "Mönstermedborgare" proves they're at their very best when they slow it down and concentrate on the riffs.

Beyond satisfying the urge to play the music that they want, these old punks don't seem to care much. They don't play live. They can't be bothered to print shirts (and I'm sure they're sick of me asking). On their latest release, simply titled 2015, they seem to have given up on trivial things like cover art, lyrics and song titles.