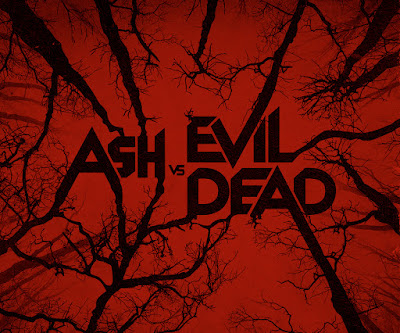 I've had serious doubts about the upcoming Evil Dead TV show, but yesterday's trailer has turned my scepticism on its head. It really looks like Raimi, Tapert and Campbell may have nailed it. All the pieces seem to be there: the atmosphere; the humour; the makeup and creature fx; the gore; the manic energy; Raimi's Dutch angles and camera acrobatics. And most importantly, Campbell looks to be in fine form and enjoying his return to the role.

Although it's grown on me over the years and I'm pretty fond of it now, I've never been that much of a fan of Army of Darkness. It wasn't what I wanted from Evil Dead III, and when I first saw it in '92 I actually hated it. Evil Dead II's outrageous humour was still there, but where was the gore and occult horror? It kind of felt like a betrayal and a kick in the teeth.

This trailer looks like the movie that I wanted to see in '92. We'll know for sure if Ash is really back on Halloween when Ash vs Evil Dead has its premiere. On a side note, I just realised that six years into this blog, this is the first time I've ever mentioned The Evil Dead and Evil Dead II, two of my all time faves! What the fuck?!

We are the things that were and shall be again!
Spirits of the book!
We want what is yours! Life!
Dead by dawn!