Although rehashing the past rarely makes for groundbreaking or progressive cinema, I'm personally quite pleased that the recent trend of revisiting the style and tropes of 70's and 80's gialli seems to be flourishing. The giallo was a wonderful, gorgeous, lurid and insane chapter of cinematic history - and until recently it looked like it was all behind us, the genre having petered out into such inferior entries as Al Festa's woeful Fatal Frames ('96) and Argento's exponentially worsening output (culminating in the absolute nadir of 2009's ironically titled Giallo). In my opinion, the last really worthwhile examples of the form were The Stendhal Syndrome and Deodato's under-appreciated The Washing Machine.

Around ten years ago I was so craving a revival of the genre that I eagerly handed over my cash to Trevor Barley/Roman Nowicki for the "pleasure" of watching the first entry in his notorious Fantom Kiler series. The enticing stills of what appeared to be the masked, fedora wearing killer from Mario Bava's Blood And Black Lace menacing naked women with a gleaming knife were impossible for me to resist. I actually watched it a few times, disliking it more with each viewing, until I finally had to admit to myself that I had been thoroughly duped. This wasn't the real thing... just an opportunistic appropriation of the fetishes of the genre, distilled into a sleazy and distastefully misogynistic fantasy. I'm no politically correct prude, and I'll happily admit to getting a few kicks and laughs out of it, but in the end I found Kiler to be little more than an unpleasant pile of shit, carefully dusted with a light coating of sugar.

Let's face it, it makes Giallo a Venezia look like a work of high art, and comparisons to other notorious films like House On The Edge Of The Park and The New York Ripper are an unforgivable insult to Fulci, Deodato and everyone else involved with those fine films. But enough about that.

One could argue that a revival of the giallo is impossible - that the form was entirely a product of it's time and cultural milieu and can't be anything but disingenuous now. If misfires like Chris Sivertson's I Know Who Killed Me (unfairly maligned, but a pretty poor flick nonetheless) were the norm, I'd probably agree with that assertion. However, it would seem that we're starting to see a number of European films emerge that aren't just aping the tropes of the Italian thriller, but building on it's conventions to further the genre in hopefully progressive ways. Let's take a look at some recently released and upcoming examples: 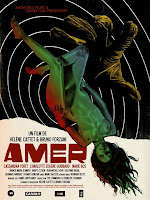 This French/Belgian co-production from 2009 is the only film on this list that I've seen, and it may well prove to be the best of the bunch. After helming a string of short films together, this is the feature debut of co-writers/directors Hélène Cattet and Bruno Forzani, and it's an impressive first effort to be sure. Although unmistakeably a modern giallo, Amer is more suited to the arthouse than the grindhouse, and will no doubt frustrate some viewers who are expecting more of a traditional stalk and slash scenario, as suggested by it's poster (but what a poster that is!).

Nonetheless it is overflowing with recognisable elements, most notably it's use of otherworldly lighting gels; a fantastic score made up of classic tracks culled from the likes of Sergio Martino's Case Of The Scorpion's Tail and Paolo Cavara's Black Belly Of The Tarantula; and a scene involving a straight razor that you won't soon forget. Some reviewers have criticised Amer for being an exercise in style over substance, but I suspect that's likely due to it's rather obfuscating narrative style. The film is heavily reliant on arcane visual symbolism to tell it's story, and if misunderstood (or ignored) it's quite understandable that one would find find it all a bit bewildering. For an in depth analysis of the film's symbolic meaning and cinematic references see Cinezilla's fascinating review HERE. 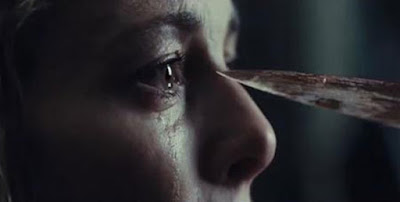 This Spanish film from last year, produced by the prolific Guillermo del Toro, reportedly plays as more of a traditional thriller than the previous Amer, perhaps making it more akin to some of De Palma's early films than the Italian directors who influenced him. Reactions have been mixed on this one, but most reviewers seem to agree that the lead performance by Belén Rueda - in a dual role, playing twin sisters - is excellent and worth the price of admission alone. A complaint common to many reviews is that the tension and dread built up in the initial hour is betrayed by a disappointingly incohesive finale. Quibbles like that won't keep me from checking this out however, as I've been reeled in by it's obvious style, atmosphere and creep factor. Coincidentally, this is screening in Sydney tonight as the closer for this year's Spanish Film Festival... get your tickets HERE!

From what I can gather, last year's Swedish thriller Ond Tro (Bad Faith) is less reliant on the more overt visual cliche's of the giallo than the other films on this list. Don't expect any garish colour gels here, rather a less superficial connection to the genre, embodied in a plot element familiar from movies such as Deep Red and Tenebrae - that of the witness to a murder becoming so immersed in solving the case, that they suddenly find themselves dangerously at the centre of it. I need no further enticement to get my ass in the seat for this than knowing that it was shot by one Hoyte van Hoytema, the brilliant cinematographer behind Let The Right One In. 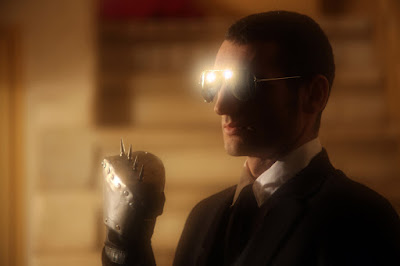 Let's leave High Brow alone for now, and fix our lecherous gaze upon this sleazy and sadistic looking little flick. Upcoming French erotic shocker Last Caress doesn't seem to give a damn about the finer elements of the giallo, it just wants to exploit every gory, sexy fetish of the genre to maximum effect. Frankly, the trailers, stills and poster for this scream "Fantom Kiler with better production values", but I think I can live with that. To be fair, this does appear to be a lot classier than Kiler (not that that's much of a complement), but whether that makes me a complete sucker or not will depend on the quality of the final product. In the meantime, the trailers provide plenty of enjoyably carnal carnage, and if pillaging some of your favourite gialli isn't enough, these cinematic perpetrators (François Gaillard and Christophe Robin) are also teasing some nunsploitation and even a little imagery lifted straight out of The Beyond! Website and trailers HERE. 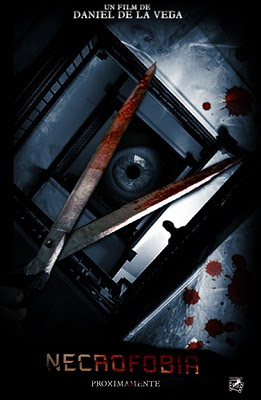 Finally, I had to include this awesome poster for an unrealised feature, from Argentinian indie director Daniel de la Vega, that went by the title of Necrofobia. It's such a perfect piece of giallo inspired art that I think it merits inclusion. I haven't seen any of de la Vega's work, but he obviously has an unhealthy fixation with Euro horror that traumatises him like a rabid cat in the brain. For proof of that obsession just look at the titles of some of his previous films: Jennifer's Shadow and Death Knows Your Name. Hmmm, talk about wearing your influences on your sleeve!
Posted by Aylmer at 13:39