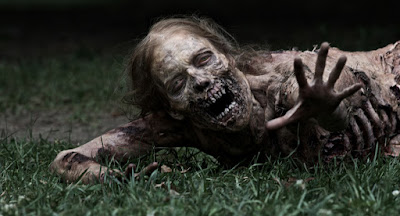 I've never really been into TV as an artistic medium beyond its obvious functions as entertainment (debatable), and as a mindless daydream inducer. In fact, my basic view of the popular media in general can be summed up in the lyrics to the Victim's Family song "Who Needs It":


Who needs free press? Objectivity doesn't exist.
Because the newspapers gotta pay the bills too man.
There's just no sense in rocking the boat.
You've got to learn to love all the garbage they feed you.
But who cares what your fed when it's forced down your throat.


Despite my dim view of the media, the last decade has seen a few TV shows - such as the thought-provoking prison drama Oz - that have made me revise my opinions on the potential of TV to be something more than just audio/visual smack.


So, to Frank Darabont's recently much-raved-about adaptation of The Walking Dead comic series. It's only been in production for a brief time but we've already been treated to some images of Greg Nicotero and team's best zombie FX... ever? The makeup/animatronic FX in these two stills is amazing. If you've only seen low-res versions of these, click on them to check out the level of gory detail.


The other aspect of this production that has me psyched is that Darabont's The Mist was the grimmest, most hardcore American horror film of the last decade. He shares George Romero's pessimistic world view, and rather poor opinion of human nature. I liked Land Of The Dead a lot. I enjoyed Diary for it's terrific gags, and I think Survival was a bold and entertaining experiment. However, I'm no blind apologist, and I'm the first to admit that all three films fell well short of the original trilogy. 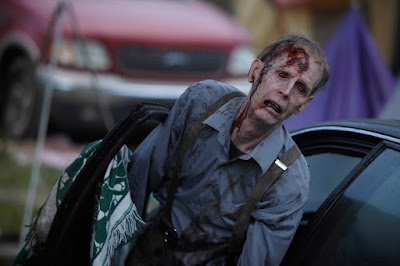 It could just be that this TV series brings us the serious Romero-esque Dead epic that we've been waiting for. No self-aware, post-modern, zom-com bullshit (the brilliant Shaun excluded). Serious social commentary, scary zombies, realistic dystopia and gore.


The one stumbling block: the comic's dialogue. At its best, it's clunky; at its worst it's flat-out cliched and cringe-inducingly bad. I think it's more than likely that the shows writers - under Darabont's direction - will iron out those kinks and make it all flow better, so I'm not too worried about it.


On a side note, my seemingly ineffective treatments of the last few years (slash, poison 'n' burn baby!) have been stepped up to a more aggressive chemo regime recently, and it's kind of fucking with me pretty hard. I'm starting to actually feel a bit like those ghouls above, so my posting may suffer a bit in the near future, both in terms of quality and frequency. I really don't know. What I do know is, just like those pesky, tenacious rotting corpses, if I do vanish for a while... I will return.