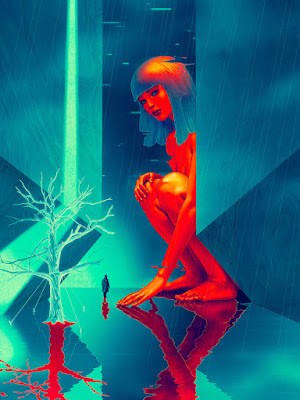 I was right to dismiss the early hype, the claims that BLADE RUNNER 2049 surpasses the original. However, it does come so tantalisingly close to matching the perfection of Scott's film that, regardless of any shortcomings, it has to be considered a resounding success. Denis Villeneuve's film isn't just a worthy sequel to the 1982 classic, but a towering artistic achievement, and a science fiction masterpiece in its own right. I'm already calling it: this is the best film of 2017.

Long-asked questions are answered, others aren't, some new questions are posed, and in that way it retains the air of mystery and ambiguity that has helped make the original so enduring. Aside from its genuinely intriguing noirish plot, 2049's greatest achievement might be that it manages to expand on the original's observations about the nature of consciousness and identity in ways that are at once surprising and deeply moving.

With that in mind, the relationship between Ryan Gosling's Officer K and Joi, his holographic "love" A.I. (played by Ana de Armas), may seem like an aside to the central police procedural plot, but it is in fact the vital, beating heart of the film. It takes BLADE RUNNER's consciousness quandary to a new level by presenting 2049's society as a multi-layered caste system, based around the arbitrary values that are placed on different forms of consciousness. A society that is maintained completely by slavery and prejudice.

BLADE RUNNER depicted a system of state-sanctioned slavery, an expendable workforce banished to the far corners of the solar system to perform tasks considered too dangerous, or simply too unpleasant, for humans. In the sequel that system of exploitation has become so deeply ingrained that it is now the pillar upon which the entire status quo rests. A rigid hierarchy in which a newly subservient model of replicant has become an indespensible part of day-to-day life, humanity now co-existing with an ever-present underclass of servants. 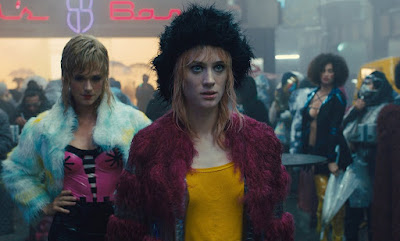 These are the sex workers; the shit-workers; the cops burdened with hunting down and killing their own kind. As Robin Wright's Lieutenant Joshi says: "The world is built on a wall that separates kind", and in order for that wall not to crumble, the order of things must be strictly maintained. Every part of the machine must keep its place within that order, so each part must be granted just enough happiness to keep it in its alotted compartment. To that end, in this fragile multi-tiered hierarchy even the slaves are afforded slaves.

So, for all the tenderness they appear to feel for one another, K's relationship with Joi is ultimately just one of master and servant, and possibly completely artificial at that. An illusion of love and humanity, a service provided by the corporation that created them, and the state that shackles them. Or is it? Does Joi have a will and agency beyond what we can perceive? And if she is fully sentient, are her feelings for K real or just programmed? Is she, in her own way, as human as her flesh and blood masters? It brings us back to the same old point: if an artificial intelligence reaches a certain level of complexity, it will probably be impossible to tell the difference. K certainly struggles with his perception of her, simultaneously aware of her artificiality while also seemingly having genuine feelings for her. Is his gift to her of the Emanator (the device that allows her to leave his apartment) an attempt to alleviate the guilt he feels for using her as others use him?

When pleasure model Mariette (with a disturbing resemblance to Daryl Hannah's Pris) says to Joi "I've been inside you, and there's not as much there as you think", the heartbroken look on Joi's face says it all. In this terrible world, where everyone is being used just to make the life of the person above them a bit more tolerable... she's at the bottom of the heap. For us, Joi's eventual fate, and its effect on K, proves to be as emotionally gutting as Roy's death in the original.

Thankfully, Ford doesn't sleep walk through this, as he has through so many of his roles over the last 20 years. He's actually very good. This film belongs to Sylvia Hoeks though. Her Luv is a cyberpunk character for the ages. She's ultra cool, but in her own way this combat model replicant is a character as tragic as Joi. Whenever Hoeks is on screen, it burns.

Ultimately though, BLADE RUNNER 2049 belongs to D.O.P. Roger Deakins (and the production design and fx depts) for creating one of the most visually mindblowing sci-fi films ever committed to film. From the desolate vistas of California's endless bio-farms and solar arrays, to the terrifying expanses of rain-soaked L.A. and radiation-burnt Las Vegas, every second is jaw-droppingly gorgeous. Deakins has got to win all the awards for this. I haven't even mentioned the eye-popping interiors of Niander Wallace's corporate H.Q., a series of spaces that are somehow ethereally beautiful and oppressively inhuman (as if they were designed to be inhabited by gods) at the same time.

What's more to say? I was anxious about the score, especially given the late-in-production firing of Villeneuve's regular composer, Jóhann Jóhannsson. So I'm delighted to say that I'm in love with Zimmer and Wallfisch's powerful music. It sits well with Vangelis' iconic score, but is also very much its own beast, a sonic blast that is very much in keeping with the images of monolithic dystopia that are unfolding on screen.

From an aesthetic point of view I did miss the urban throngs that jam the streets of the original, such a convincing cultural melting-pot, but a good reason is given for their absence: with at least nine successful colonies established throughout the solar system, everyone who can has moved Off-World. As far as they can get from a choking, diseased and dying Earth.*

So, that's it. After decades of waiting, Denis Villeneuve and co. have somehow pulled off the seemingly impossible. An almost perfect sequel to a perfect film. As in 1982, it would appear that BR 2049 is destined for financial failure. Too slow; too arty; perhaps too prescient a vision of our future for comfort. I for one have seen it three times, and I'm looking forward to future viewings on blu ray. I urge you not to miss this deeply affecting and visually stunning masterwork on the biggest, loudest screen you can find. 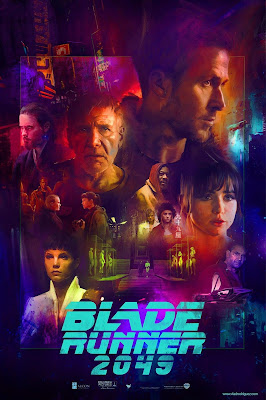 *Another criticism of 2049's design aesthetic that people are picking on, but which can be logically explained: L.A. 2049's streets and interiors appear to be less cluttered and filthy. To my mind, this is due to the fact that the city of 2019 was built on the retrofitted and crumbling infrastructure of 20th century L.A., as exemplified by the filthy interior of L.A.P.D. H.Q., and the dank and dilapidated state of the Bradbury building. The L.A. we see in the first film simply hasn't caught up to the challenges presented by the population explosion and ecological disaster that have beset it.

However, by 2049 we see some improvements brought about by the sheer necessity of living in such a hostile environment. The interiors of the new Police H.Q. are hermetically sealed against pollutants and weather, as is K's apartment. The streets, already less crowded due to the presumed Off-World diaspora, are kept cleaner by employing humanity's age-old solution: out of sight, out of mind. See the landscape of endless human waste that covers what was once San Diego, and the titanic barges that feed it.