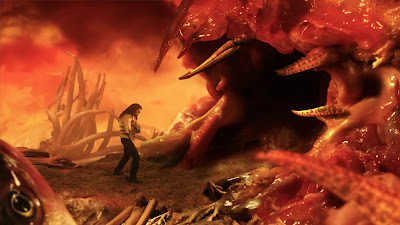 Spend a few fucked-up minutes inside the head of Syl Disjonk. You'll be happy you did. IMDB tells me that this Québecois madman (and Voivod loving metalhead) contributed vfx to Éric Falardeau's existential gorefest Thanatomorphose*, but before today I'd never heard of him (so thanks Twitch).

Disjonk's fringe sci-fi/horror aesthetic would be a perfect fit for Astron-6, as his shorts have more than a passing resemblance to the work of fellow Canadian Steven Kostanski. However, please disregard my lazy comparison, because this guy is obviously on his own trip. 2011's award winning Ethereal Chrysalis is a brain melting hybrid of Lynch, Lovecraft, Terry Gilliam's Monty Python animation and the hellish fleshscapes of Australian surrealist James Gleeson. It also features a great score by Martin Gauthier (who scored 2007's underrated demonic subway shocker End of the Line) and practical fx work by none other than the infamous Rémy Couture.

Dim the lights, crank up the volume and enjoy!

*Disjonk also served as editor on a couple of shorts: Broken Flesh Ecstasy and Imperatrix Cornicula. Based on those titles alone, I have to see them.