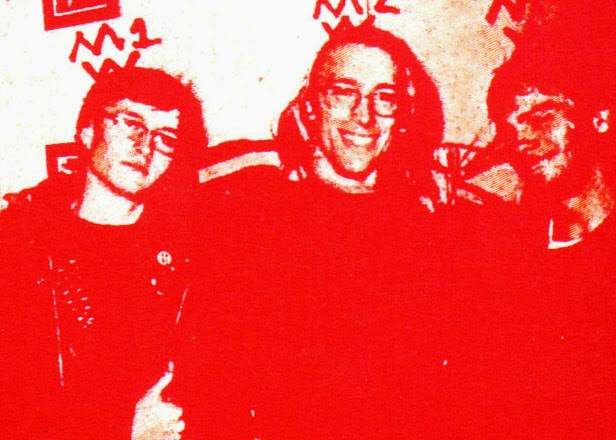 Akron, Ohio, uh, I mean Hammond, Indiana's Coneheads have achieved something that I honestly didn't think was possible.

Somehow these three teenage punks from the midwest have managed to completely nail not only DEVO's sound, but their attitude, philosophy and sense of humour as well. These young neo-spuds just get DEVO to a fucking tee.

Their sound falls somewhere between DEVO's raw mid '70s pre-album material and Q: Are We Not Men? A: We Are Devo! (with a hint of Duty Now for the Future creeping into a few tracks). They also kind of remind me at times of The Proletariat, that strange band who always felt like the odd one out on This Is Boston Not L.A.

When I say that this Indianan Smart Patrol has achieved the impossible, I'm talking about their ability to make music that's intrinsically tied to a particular band/sound/philosophy, but still manages to come off sounding cool and fresh. Many jocks, ninnies and twits have tried their hand at de-evolution before this, and all have failed*. All Hail The Coneheads! Hack, hack, hack!

The bandcamp link below is to their latest release, the 14 Year Old High School PC​-​Fascist Hype Lords Rip Off Devo for the Sake of Extorting $​$​$ from Helpless Impressionable Midwestern Internet Peoplepunks L​.​P​.​ It compiles their first two tapes, Out of Conetrol and Canadian Cone, but I urge you (uncontrollably) to seek out their latest tape, Selected Ringtones, cuz it's their best stuff to date.


WHO YOU THINK YOU'RE FOOLING WITH THAT PUNK FACADE?