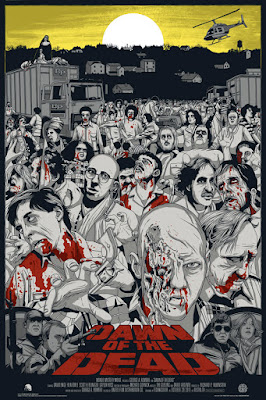 This poster by Jeff Proctor for Mondo Tees recent Mondo Mystery movie screening of Dawn Of The Dead is incredible.

Jeff always does outstanding work (I love his poster for Hobo With A Shotgun), but he's truly outdone himself here, creating the coolest piece of alternative artwork for the movie I've ever seen (I've still got a nostalgic fondness for the poster book artwork too, at right). He must have spent hours pouring over reference material in an effort to get every zombie in the movie on there, and I think he's just about done it.

It's sort of like a Where's Wally of the walking dead.

Some of the more prominent ghouls on the poster: the plaid shirted poster zombie, Stephen, hare krishna, the zombie who's cranium Stephen ventilates in the elevator, machete zombie, the blonde girl who attacks Roger in the truck, Roy Frumkes getting a pie to the face, the African woman who gets her jewelry so rudely snatched by the bikers, helicopter zombie, the fat zombie who falls into the fountain, sweater/escalator zombie, nurse, M-16 zombie, Miguel (who takes those meaty bites out of his wife in the tenement) and the nun (love that undead tableau on top of the truck).

That's only about half of the festering blue rotters. Who have I left out?

But the attention to detail doesn't stop there! Jeff has even included vehicles from the film as if they are characters in their own right. The WGON helicopter hovers in the sky, as the two trucks driven by Peter and Roger sit in the stinking, seething car park below. Interestingly, the grill and light of the car visible between the trucks isn't the 1978 Volkswagen Scirocco driven through the mall by our heroes, but a 1977 Ford Pinto seen elsewhere in the movie.

Please enlarge the poster to study it really closely for a long time and become completely obsessed with it as I did.