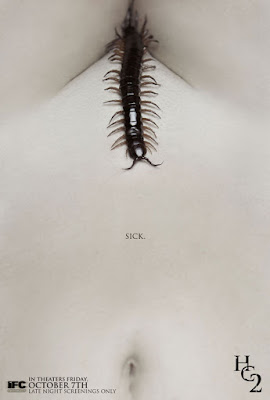 I actually think "Ass 2 Mouth" would've made a pretty classy tagline for this sequel, but I digress.

The premise behind Tom Six's Human Centipede series, shallow as it may be, is obviously quite seductive to me. Having been sucked into the vortex of hype surrounding the first film, only to be left disappointed and wondering what all the fuss was about, I've still got enough interest in this revolting spectacle to subject myself to it's sequel. Although the first film didn't deliver on it's promise, I didn't completely dislike it. It was an attractive film, pretty easy on the eyes really, and the central performance from Dieter Laser as the mad Dr. Heiter was amusing and entertaining enough.

Both films have raised the ire of many horror fans who feel that Six is just an egomaniac having a laugh at our expense, and continuing to guffaw all the way to the bank. I have no doubt that he's doing just that, but personally I don't always need to be pandered to and treated like a valued customer. I don't mind being fucked with a bit, and after all, horror filmmakers have been doing it for decades. It's called exploitation cinema for a reason.

At least Human Centipede 2 (Full Sequence) looks like it truly delivers on the disgusting goods.

If you're an inquisitive sucker like me you can find out for yourself this weekend, as Sydney's Mu-Meson Archives are hosting three screenings of the film completely uncut. Each screening will feature an appearance by Martin himself, Laurence R. Harvey (right). Details follow:

Coffin Ed - freelance writer. Coffin has been involved in the Sydney music scene for the past thirty years and was also co-founder of the Mandolin Cinema during the 1980s. He currently writes for Drum and City Hub and was a former FBi Radio presenter with the Naked City program.

Dean Bertram (PhD) - freelance writer, filmmaker, and film festival director based in Sydney. He is the co-founder of A Night of Horror International Film Festival.

Richard Kuipers - film critic for the international trade paper Variety. He also contributes movie reviews and commentary on ABC Radio National and the webzine Urban Cinefile. Richard has produced and directed several documentaries including Stone Forever (1999), a look at one of Australia's most famous cult films. He produced the national television program The Movie Show on SBS Television from 1992-2000.