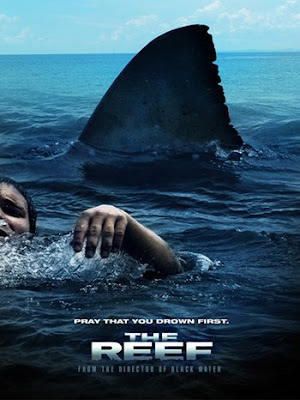 Zombies. Monsters. Ghosts. Demons. I'll always love 'em, but the truth is that they just don't scare me much anymore. Unfortunately, desensitisation is an inevitable side effect of watching too many horror movies... sooner or later, the dreaded phantom of ennui casts it's long shadow over the enthusiasm of every long-term horror addict. I crave the unbearable nerve-shredding terror that I felt watching Evil Dead for the first time, but with each passing year it's an itch that's getting harder to scratch.

Well, for the second time in a year I'm happy to report that I've seen a movie that succeeded in scaring the shit out of me (the first was Adam Green's Frozen, which I raved about here).

New Aussie shark thriller The Reef falls under the same sub-genre as the aforementioned Frozen and their close cousins, Open Water and Black Water. The settings may differ, but all these movies are almost identically structured, exploiting the same universal fears and presenting them with the same pseudo-documentary realism. They're effective and scary purely because of this straight-forward simplicity.

In a time when genre film is increasingly reliant on gimmicks and twists to reinvigorate old ideas, it's refreshing to see these movies that are so unpretentious. Not every horror director can pull off the sociopolitical commentary of Romero or the philosophical musings of Cronenberg, and when they try, all too often it comes off as dishonest and shoehorned in - an attempt to lend a sense of depth and meaning to what amounts to little more than a conglomeration of cliches. The thing about these new nature shockers is that they don't need to be cerebral, or even unpredictable, to be frightening - the fears therein are primitive and visceral. The thought of being eaten alive by sharks or wolves is no less horrifying in the 21st Century than it was for our distant cave-dwelling ancestors. 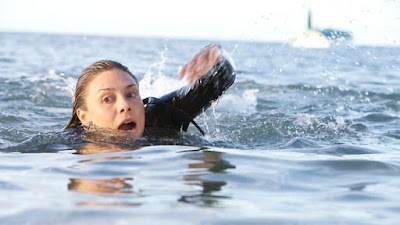 For obvious reasons, The Reef is a closer relative to Open Water than Frozen, but where Open Water was only partially effective at evoking terror, Andrew Traucki's new shark-attack flick had me feeling a twinge of nervousness every time I set foot in the ocean this past summer (I caught an early screening a few months ago, just as summer was kicking in down here). In fact, I'll go on record here as saying that I think it's far and away the best shark movie since Jaws. Part of the film's success lies in Traucki's decision to reign in any temptation to try to outdo Jaws, and the film really benefits from this restrained approach and lack of excess. There's only one shark, and it's not a giant, just a very respectable 12-15 foot Great White. The shark behaves like an animal, not a monster; the protagonists like people, not heroes. 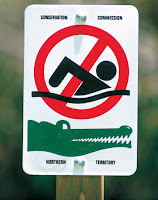 Although I didn't really like Traucki's previous crocodile thriller Black Water (set in Queensland, but shot in mangroves not an hour from where I'm sitting now), it does provide a good example of the degree of realism to which Traucki aspires. If you have any doubts about the veracity of that film's storyline, you shouldn't, as my friend Phil found out the hard way some years before it was made. At the time he and some friends were living a pretty feral existence in a rainforest region of Far North Queensland. Phil's no fool, has a good knowledge of the bush, and is respectfully aware of the myriad dangers it conceals.

One day a simple miscalculation found them deep in a mangrove area, with the tide coming in much earlier then expected - and very rapidly. All of them were well aware of the very real and present danger of saltwater crocodiles and promptly started hauling ass out of the swamp. Soon enough, the tide was too high and the danger of salties too great - so they were forced to take to the trees for the rest of the afternoon and the entire night, only crawling out, sore and exhausted, the next morning. They never even saw one that day, but statistics dictate that they made the right decision to climb those trees, and it may well have saved their lives.

You'll notice that I'm giving precious little away about The Reef. Honestly, it's such a pared-down little film, that to give away too much would be to do it a disservice. What do you need to know about it? It was masterfully shot on digital camera (a couple of Red cameras I believe) and looks gorgeous. The cast represents something of an Underbelly reunion, which is no bad thing. It builds tension that will wind you up 'til you're squirming in your chair. The next time you swim in oceanic water deeper than 30 feet, you'll keep feeling the urge to look behind and underneath you. Maybe curl your toes up and draw your legs in a little closer to your body. You'll try to relax as you start to hyperventilate... but there's no point telling yourself it's only a movie... because it's not. 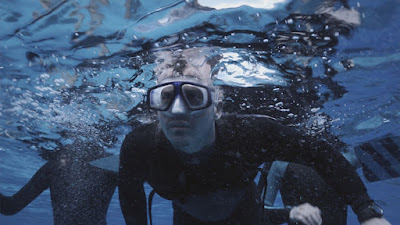