"Children of the night... what music they make" 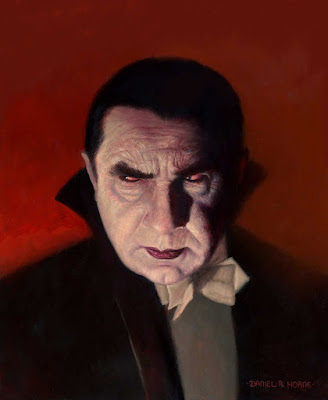 Last night I crawled out of my rotting coffin, ascended from this vaulted cellar and took to the city streets. Not in search of human prey and warm blood, but to see Philip Glass and the Kronos Quartet perform their Dracula score live in front of a screening of Tod Browning's magnum opus. 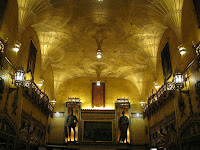 It was quite an experience, seeing a beautifully restored print of the 1931 Universal classic in Sydney's most atmospheric old theatre (right). All of the ushers were dressed in Transylvanian black (including long capes with crimson lining), which was a nice touch.

This was my first time hearing the 1998 score, and I was impressed by it's originality, Glass having seemingly avoided falling back on the conventional motifs common to most modern horror scores. This music isn't so much creepy or scary as it is dramatic, but thankfully not the melodramatic orchestral bombast that has always been the bane of Hollywood. The Kronos' small ensemble of strings and piano don't overwhelm the imagery, and the style - which is reminiscent in parts of traditional Hungarian and Romanian gypsy music - is perfectly suited to the film's moody Gothic atmosphere. A good example of cinematic revisionism done right.

Bonus trivia: you probably already know that the Kronos Quartet performed the memorable score for Darren Aronofsky's Requiem For A Dream as well as his visionary (and sadly overlooked) The Fountain, but did you know that Philip Glass contributed two original pieces to Michele Soavi's The Church?