Soon my neighbourhood will be pulverised to atomic dust, as thousands of Sydney residents die screaming under gigatonnes of molten skyscraper wreckage. Even now, the bringers of our impending Doom prepare their campaign of annihilation from deep beneath the rain-slick streets of Tokyo. We are as ants before their mercilessly crushing onslaught.

Am I talking about a city-razing battle between Hedorah and Gojira? No, although the destructive force to which I allude could be compared to Hedorah: 48,000 tons of corrosive, poisonous SLUDGE! 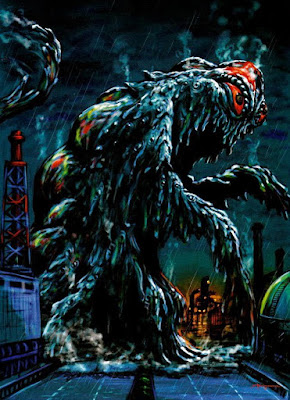 The monstrosity of which I speak is Tokyo's dealers of death and doom - COFFINS. They've announced a whirlwind Aussie tour in September, and having had my face melted off by Osaka's Birushanah at Dirty Shirlows just a couple of months ago, I can't wait to witness more mayhem from Japan.

Get their 2008 album Buried Death. It's kaiju heavy.