Is there a moratorium on mentioning the Guinea Pig films, and if so, has it been lifted?

Eight or nine years ago the Japan Shock double feature of Mermaid in a Manhole/Android of Notre Dame and the lovingly produced Devil Pictures boxset were two of the most talked about and sought after horror DVD's around. I was on board that particular gore-hype express, and can remember the day that my Mermaid/Android DVD arrived in the mail. My excitement at finally seeing it was tinged with a delicious trepidation that I might be about to watch The Goriest Thing I Had Ever Seen (Mermaid delivered, Android did not). Cut to 2005, and by the time the series had it's US disc debut on Unearthed Films, I was already pretty sick of hearing about Za ginipiggu. My curiosity satisfied and my blood lust sated, I sold my German boxset (for a tidy profit, but I wish I'd kept that t-shirt!) and moved on to other, as yet unseen gorefests. 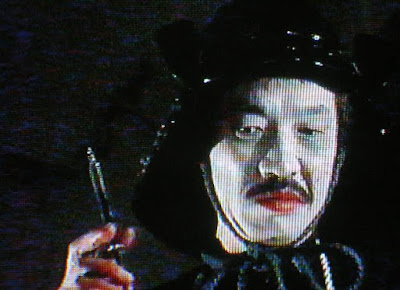 The other day, for the first time in years, I revisited the only two entries in the series that ever really made an impression on me - Mermaid and Flowers of Flesh and Blood, both directed by the venerable Hideshi Hino. Much to my surprise I found that I was enjoying them more than ever. There's something about the deliberate pacing and gloomy atmosphere of both films (but particularly Mermaid), that I find mesmerising. They play more like televised theatre than films, and although that's obviously a by-product of budgetary constraints, it really works in the films favour. It turns them into intimate little chamber pieces that draw the viewer into their claustrophobic confines, and once there, pummels them mercilessly with some of the most shockingly transgressive images ever filmed.

With their combination of poetic surrealism and hardcore gore, I think these two little films represent an unusual nexus of art and horror. Other art/gore films, like Karim Hussain's Subconscious Cruelty, that try too hard to be arty, invariably come off as being pretentious. It feels to me as if Hussain is trying to legitimise his love of blood and guts by attempting to "elevate" it to the status of art. In the case of Flowers and Mermaid I think the opposite is true - Hideshi Hino (a genuinely eccentric artist) set out to make simple gore flicks with the sole intention of shattering taboos, but couldn't help infusing them with his bizarre artfulness. The result is a sort of unintentional performance art/kabuki/splatterfest. 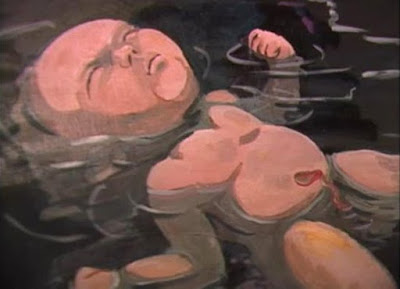 I've never been tempted to delve into the dauntingly vast world of printed manga, but when I was recently introduced to the incredible work of Maruo Suehiro (and Guro art in general) at the suffer for a world of silence blog, my interest was piqued. I started seeking out horror manga (an excellent blog for this is Flying Teapot), and in so doing stumbled on the printed works of Hideshi Hino (which in turn led me to revisit his two Guinea Pig entries). I was delighted to find in his manga all the obsessive imagery that is present in Mermaid in a Manhole. Sewers depicted as a fantasy underworld, discarded foetuses, living putrefaction, disease, creepy crawlies, pus oozing and spurting everywhere and above all, a gloomy feeling of social alienation and lonely despair.