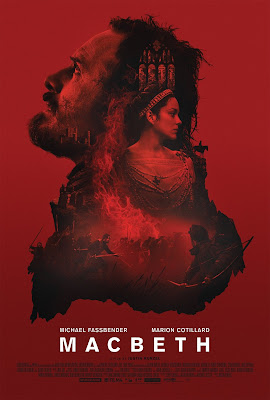 Polanski's Macbeth (1971) will probably always remain my favourite adaptation of the play, a film so full of trippy occultism, dread and blood that the experience of watching it isn't far removed from gothic horror. King Duncan's murder and the banquet scene (where Macbeth is tormented by the ghost of Banquo) honestly wouldn't feel out of place in one of Hammer's gorier offerings.

The final confrontation between Macduff and Macbeth is one of the most perfectly choreographed sword fights ever filmed. The desperation and single-mindedness of the two combatants is palpable and visceral, every second of fighting realistic, vicious and brutal. As with Boorman's Excalibur, you can really feel the weight of their armour, the two men battling exhaustion as they pummel and hack at the other. Macbeth's death (below) is horrific. Before a sickeningly realistic beheading, he's run through from armpit to clavicle, and it remains one of the nastiest stabbings ever committed to film. To this day, every time I watch it I feel queasy. 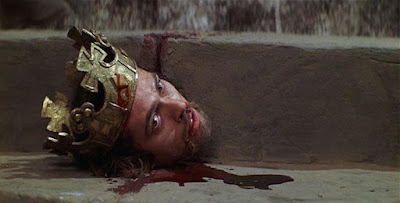 Now Australian director Justin Kurzel (Snowtown) has delivered his own version of the Scottish Play, no doubt also destined for cult status, albeit for different reasons than Polanski's. Fassbender and Cotillard both give mesmerising performances, and Kurzel comes up with some interesting personal touches (here Birnam Wood advances on Dunsinane as embers, not felled trees, and the film opens with an explicit answer to the oft debated question of whether the Macbeth's ever had a child), but the real star of this latest Macbeth is its visuals, courtesy of Adam Arkapaw's exceptional cinematography.

Kurzel's film strikes a fine balance between traditional and contemporary: the dialogue, production design and Highland locations are what you'd expect from a traditional adaptation, but visually this Macbeth is like nothing you've ever seen. The exterior locations and interior sets are breathtakingly shot, but the thing that really brings it all to life is Macbeth's moody lighting and colour palette. I don't know how much of this Arkapaw achieved on location and in camera and how much was done in post, but the end result is exquisitely eerie and atmospheric. Highlights include some shots of hand-to-hand combat captured in ultra slow motion, like a dramatic tableau come to life. It's powerful stuff. The siege of Dunsinane at the end of the movie is pure apocalyptic eye-candy, the action obscured in smoke and bathed in an otherworldly diffuse glow.

I've been a fan of Arkapaw's for a while now, as he also did some stellar work on Cary Fukunaga's True Detective, so I'm happy to see that he received the American Society of Cinematographer's Spotlight Award for his work on Macbeth.  Anyway, see for yourself as I spent a while pouring through my Blu to pick out some of the film's most striking images.