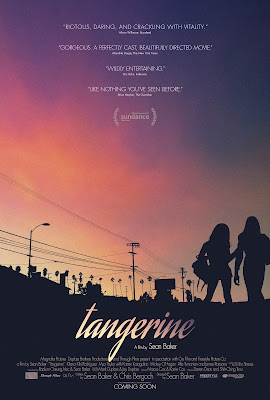 The United States. Land of opportunity and hope. Home to a vast underclass of people for whom neither of those things apply, and for whom the last resort is often to sell their bodies just to survive.

They drift anonymously past our car windows. Walking down the sidewalks we might make eye contact, exchange a few words, perhaps hand over a cigarette or a few coins. For the most part however - no matter how much empathy or guilt we may feel - these are the people that we, the more privileged, go through our lives ignoring.

I doubt there's a person reading this who hasn't sheepishly wondered, "who are you and how did you get to this bad place?". If you've ever considered what it might be like to walk in those shoes for a day, Sean Baker's Tangerine offers a safe window through which you can take a look. It's a look worth taking too, because rather than the sensational exploitation one might expect, Baker approaches his subjects with compassion, humour, honesty and tons of style.

After a lovely opening credits sequence, we're introduced to two transgender sex workers, Sin-Dee Rella and Alexandra. It's Christmas Eve, but for these Los Angelenas it's just another day of hand-to-mouth survival. Sin-Dee has just returned to the streets after a 28-day stint in jail. The two are catching up over a celebratory shared donut, when Alexandra lets slip that Sin-Dee's boyfriend (and pimp) has been cheating on her while she was inside. So begins an odyssey through the rougher streets of Hollywood, as Sin-Dee goes on a mission to hunt down and confront her lover/pimp and the woman he's been seeing.

Mya Taylor and Kitana Kiki Rodriguez (two relatively inexperienced transgender actresses who Baker met at the LA LGBT Centre) absolutely kill it as the two leads, both attacking their roles with an intensity and energy that makes it impossible to look away. Coupled with Baker's razor sharp editing style and a hard hitting dance soundtrack, these two firebrand performances give much of the film a relentlessly breathless pace that hardly lets up til the last frame`. A subplot involving an Armenian cab driver named Razmik (Karren Karagulian) provides some respite from the white knuckle pace, but for the most part this film is a total adrenaline ride. 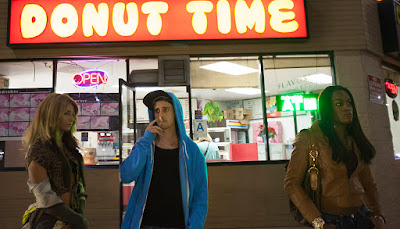 To be honest there isn't a single member of Tangerine's cast who doesn't deserve praise. The Wire and Generation Kill's James Ransone turns up as small-time pimp Chester (the object of Sin-Dee's affections and ire), and proves once again why he's one of the best young character actors around. Just as he did with another character of the same name (as Chester "Ziggy" Sobotka in season 2 of The Wire), Ransone again shows an uncanny ability to perfectly balance detestable sleaze with lovable charisma. Rounding out the ensemble is Mickey O'Hagan, who gives a hilarious but ultimately heartbreaking performance as Dinah, a drug-addled and terminally cynical prostitute who made the mistake of sleeping with Chester. Also worth mentioning is a sad little cameo from Return of the Living Dead's Clu Gulager as a drunken Cherokee man. This single minute of raw, painful acting is worth the price of admission alone.

Much has been made of the fact that Baker shot Tangerine on an iPhone, and from a technical standpoint it is a remarkable example of shoestring filmmaking. It's a gorgeous looking film, and if I didn't know better I would have simply taken it for granted that it was shot on a high-end digital camera. However, it's important to note that the cinematic quality of the film was achieved using a mini Steadicam device called a Smoothee (designed by Steadicam specifically for smartphones), and the sound was captured using standard cinema quality digital mics. That's likely to burst the bubbles of a few penniless aspiring filmmakers hoping to emulate Baker's success. 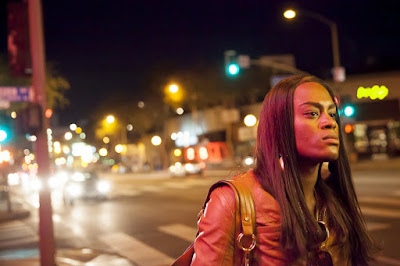 As a writer, director, cinematographer and editor Sean Baker is obviously a major up-and-coming talent. Yet, despite his obvious technical prowess, Tangerine is a film that soars because of its heart, not its cleverness. An honest exploration of the street-level sex trade that exists in every American city, plainly visible, but so easy to ignore. Grounded by a couple of incredible performances and a terrific supporting cast, it's a rollercoaster of a film, by turns hilarious, completely badass, horrifying and tearfully moving. Very highly recommended. 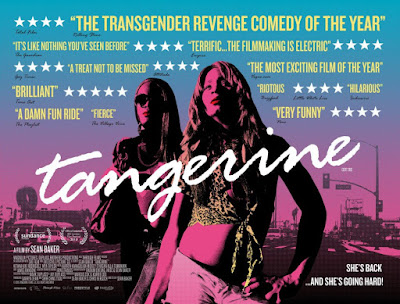